I think you’d all agree with me when I say: learning the future tense in Spanish can be REALLY tough.

And let’s face it, extremely dry grammar content fluffed up with fancy jargon does NOT help you understand how to use it.

I can almost hear the Royal Spanish Grammar Family scoffing form here, lording over their illusive intel and plotting how to take their secrets to the grave.

Well, my friends, today YOU’RE in luck, because I’ve been spying on the Lordship and I have some exclusive insider info that will dramatically improve the way you learn the future tense in Spanish.

I spend all my time decoding the puzzles so that YOU don’t have to!

Today, we will be uncovering everything you need to know about the Simple Future tense, along with some powerful advice that will help you remember WHEN it’s applicable as well as give you a…

BONUS TIP: when it can be swapped out for something easier!

How to Express the Future in Spanish

What is the “Future” to you?

Here’s the deal- you may have noticed that I didn’t write future “tense”, and that’s because before we jump into robotic conjugations, it behooves us English speakers to think about how WE use the future tense in Spanish. You’d be shocked to know how many people learn languages without ever analyzing their own!

When we think of time, we generally see three planes: PAST, PRESENT, and FUTURE. And when we stumble upon a Spanish grammar book for the first time and see 32 tenses, we naturally have an existential crisis and want to pull our hair out.

But there’s an EASIER way…

For us, the future is either one of THREE things:

All subtle differences, which can be imagined through the following scenarios:

The perception of future differs from culture to culture. Ancient Amerindians believed the future was behind us (because we couldn’t see it) and the past was in front of us. And if you’ve ever heard a German speaking English, you would notice that they do not occupy #1, and exclusively speak in #3- “I will do this… I will go there” (now those are people are efficient!!!).

THE BEST PART is that our Latino and Spanish brethren are procrastinators like us, and we use the future in almost exactly the same way. So the key takeaway is to ALWAYS think in English first which form of the future you would use.

Three Ways to Express the Future in Spanish

Again, all subtle differences, but they break down in these three ways:

Let’s attack 1 and 2, our informal buddies, before we take on 3.

The first way is by the far the most used way to express future. It is almost an exact translation of “I am going to do”, or “I’m gonna do”.

NOW, LISTEN UP HERE FOR THE NATIVE SECRET. The second way is the easiest way to express future. It’s the golden ticket!

In English, we slop together the subject “I” with “Will” to make “I’ll”, ultimately to save time.

In Spanish, we save time by just using the PRESENT instead of the FUTURE tense (you don’t even have to conjugate the future, how sweet is that?!) and it sounds way more colloquial and smooth.

Some more examples of expressing future in the present tense are:

SIMILARLY, if the future event is CERTAIN, many times the present tense will do just fine:

I CANNOT EMPHASIZE ENOUGH how important it is to master #1 and #2. You must learn first how to conjugate the verb “ir” (yo voy, tú vas, él va…). Once you have this down, you just need to remember the infinitive verb (hacer, comer, beber…) and BAM!

You have the future that is most commonly spoken around the world, without ever having to conjugate the Simple Future tense! Look at all this time we are saving!

Additionally, with the powerful TIME SAVER above, if you know how to conjugate the Present, you have already mastered two of the three ways to express future! Felicidades!

Now To the Future… And Beyond!

Easiest Way to Conjugate the Simple Future Tense in Spanish

The Simple Future tense (#3) is used much less than the aforementioned two future forms, but nonetheless we WILL learn it together! (Grammar pun).

It is formed by taking the WHOLE infinitive verb (TO SPEAK = HABLAR) and just smacking the appropriate ending on it! Fácil!

HISTORY BUFFS: In the old days of Shakespearian Spanish, people would say the infinitive verb followed by the conjugated verb HABER. For example, “Hablar he”, which literally means “Speak, I must” and sounds a whole lot like modern-day “Hablaré!”

Pesky Irregular Verbs that Crash the Party but Come in Handy!

LOOK – Everyone who has every learned a foreign language in the history of the world has bullied irregular verbs for being different. They are like the mysterious, misunderstood kid who wallows in the corner and is difficult to communicate with. 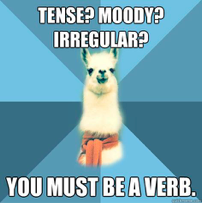 But once you get him to open up, you have more compassion for him and all of humanity as a result!

We shouldn’t FEAR irregular verbs or make fun of them. Once we master them, the world gets a bit brighter. When we know better, we DO better.

What are the Irregular Verbs in Future Tense Spanish

Often, the most common everyday verbs are irregular, including TO BE (ser/estar), TO DO (hacer), TO SAY (decir) – you know, trivial things! But statistically speaking, the numbers are as follows:

There are three categories of verbs that play hard to get and DO NOT FOLLOW the regular Future Tense Conjugation pattern in Spanish:

Let’s go over each one!

1. How to Speak in Future Tense When Verbs Drop E from the Infinitive

The model doesn’t stray far from the regular verb format. Just add the same endings, but drop the e from the infinitive (HABER -> HABR) + ENDING!

WE’RE IN LUCK! These verbs are some of the most commonly used, so you’ll remember these easily!

2. How to Speak in Future Tense When Verbs Drop E or I and add D

Easy peasy- drop the i e and add the d (PONER PONDR) + ENDING!

3. How to Deal with Diva Verbs that Demand Their Own Way

These verbs are far and few between (gracias a Dios!) and thus we just need to appreciate them in their uniqueness and memorize their patterns.

So… When Exactly do I use #3 (Simple Future), and Why Does it Matter?

We English speakers know that we use “I am going to…” (and the less tasteful “I’m gonna…”) way more than we use “I will”. But the reality is there are some uses in Spanish that we DO NOT have in English, where it only makes sense to use the Simple Future tense.

Is that… God speaking?

However, the same goes today for parents disciplining children.

For example, when your mom tells you to stay on a bench while she peruses the whole store “No te moverás de este banco hasta que regrese!”. On the contrary, “No te muevas” would be more for the period of time it takes to snap a picture. “Stay still, don’t move!”

Romance is in the Air

Oh, the romance! We often use the Future in English to indicate when we will ALWAYS be there for someone, physically or emotionally, but the same goes for commitments, jobs or sports teams. Hint: It is almost always accompanied by the world always (siempre). 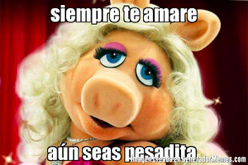 BOTTOM LINE, People of the Future

Yes, okay, we have learned how to conjugate the regular and irregular verbs of the future, but MOST IMPORTANTLY now we know that the future in Spanish is so much more than just the Simple Future tense! The future tense in Spanish can also be the verb ir + a + infinitive (aka informal future) and sometimes just the Present tense (aka easy peasy).Easy as 1,2,3!

Moreover, we’ve seen that the future can be used for possibilities, solemn commands and juicy declarations of love. Qué lindo!

Thank you for taking a journey through time and space with us to understand the future of the Spanish language! We hope this page was useful and may always be used as a reference. Hasta el próximo, amigos!

3 thoughts on “Future Tense in Spanish: The Only Guide You’ll Need”