As a linguist, the Spanish verb poder always makes me weak at the knees and tremble in humility at how powerful (poderoso) it is!

This verb is in control! The meaning of poder in English translates to “can” or “be able to”, but it doesn’t stop there! It also expresses a world of future possibilities of what may, might or could happen. It can even describe magic powers!

In this guide to poder, we will cover everything you need to get plugged into this power source! You can expect:

Can you handle it?

What is the verb poder?

Other words we derive from poder include:

The key takeaway is if you can remember the words relating to poder in English, you’ll never forget all of its meanings in Spanish!

In this section, we will conjugate the Spanish verb poder in its most common tenses, starting first with the easy indicative tenses and then moving on to the more advanced subjunctive/perfect tenses. Then, we will give examples of each tense that you can actually use!

In this section, we will conjugate the present, preterite, imperfect and future tenses of poder, explain how they are used and give examples of each tense in action.

*Irregularities are in red

To express something you can or cannot do, or are simply unable to do.

“(Yo) no puedo salir hoy noche… tengo muchas tareas que hacer.”
I can’t go out tonight… I have a lot of homework to do.

To express something you could not or were unable to do in a fixed moment in the past.

“Ayer (ella) no pudo ir a la escuela.”
Yesterday she wasn’t able to go to school.

“(Nosotros) no pudimos dormir anoche porque había mucho ruido.”
We couldn’t sleep last night because there was a lot of noise.

To express something that you could or were able to do over an indefinite period of time in the past.

“Cuando era niña, no podía pronunciar la r.”
When I was a little girl, I couldn’t pronounce “r”.

“Cuando vivíamos en el campo, podíamos correr descalzos.”
When we lived in the countryside, we could run barefoot.

To express something that you will or will not be able to do in the future. It is usually used for more formal business situations.

“Si usted no se registra hoy, no podremos garantizar su plaza.”
If you do not register today, we will not be able to guarantee your spot.

“Una vez que estemos todos juntos, podremos empezar.”
Once we are all together, we will be able to start.

In this section, we will conjugate the subjunctive present, subjunctive imperfect, conditional and perfect present tenses of poder, explain how they are used, and give examples of each tense in action.

*Irregularities are in red

To describe desires, doubts, wishes and possibilities about whether someone can or cannot do something. In the first example, doubt is being expressed. In the second, desire.

(For help with the Spanish Present Subjunctive, check out this article!)

“No creo que puedan venir hoy.”
I don’t think that they can come today.

“Espero que (ella) pueda participar!”
I hope she can participate!

“Si (tú) pudieras hacerlo hoy, lo agradecería mucho.”
If you could do it today, I would appreciate it a lot.

“Sería genial si pudiéramos jugar en el mundial!”
It would be amazing if we could play in the world cup!

“Si vivieras en Miami, podríamos trabajar juntos.”
If you lived in Miami, we could work together.

“¿Podrías venir conmigo, por favor?”
Can you come with me, please?

“No he podido corregir tu ensayo.”
I haven’t been able to correct your essay. / I haven’t gotten around to correcting your essay.

“No ha podido entrenar últimamente porque está muy enfermo.”
He hasn’t been able to train lately because he is very sick.

Listen to me: If you are able to differentiate between the above tenses, you will become a master in the verb poder!

Now let’s look at 6 different meanings of the verb poder in a context you can actually see on a daily basis!

In this section, we will discuss the 6 different meanings of the verb poder and include example sentences and contexts for you to follow along!

This meaning is the most straightforward, which expresses if you can or are able to complete a task.

“Yo puedo poner la mesa.”
I can set the table.

“Ella puede correr una maratona.”
She is able to run a marathon.

2. Ask Politely for Permission, “May” or “Be Allowed To”

The verb poder in this sense expresses the idea that one is allowed or given permission to do something.

BUT THERE’S MORE: Poder(se) is the reflexive form of poder. You may be familiar with the term ¡Sí se puede! which Disney famously translated as yes we can! In reality, it translates to “yes, it is possible” and the pronoun is removed from the equation altogether.

This is an interesting cultural nuance of the Spanish language because it removes the responsibility of the individual.

This is similar to the example of when you drop something in Spanish – you would say “se cayó” (it fell). If a guard pulls you aside and says “you can’t do that”, the responsibility immediate falls on you as an individual. However, if a guard comes up and says “eso no se puede”, the rule becomes a general somewhat aloof guideline.

Moreover, the reflexive verb has another variation: “no se ha podido” in the perfect present. This is to say it was not possible in the past. This matters because you will see this on all technological devices in Spanish and it will drive you crazy – be warned!

It was not possible to establish the environment for the application.

Whatever that means. Hey, I don’t speak technology! This is a Spanish lesson.

Poder conjugated in the third-person singular (you know, like the non-gender “it”) and then followed by another infinitive verb indicates speculation about something that may, might or could happen.

Note: There are many different ways to say “maybe” in Spanish, such as tal vez, quizás, or de pronto, in the same way English has “maybe”, “perhaps”, “perchance”, etc.

However, puede ser literally translates to can be and is used specifically as a response to confirm “yeah, it can be that, why not” when someone offers you something (literally or figuratively).

What do you want to drink? A coke?
Yeah, sure.

What theme do you want to do for the project? The second world war?
Yeah, that can work!

THAT’S NOT ALL! The negative of puede ser does not work in the same situation. It’s only used in the context of disbelief.

My boyfriend cheated on me!
NO, It can’t be!

Poder is used to express perhaps with the conjunction que in the middle followed by yes or no. Unlike puede ser, this is NOT a response you give to someone who offers you something. Rather, it is a speculation of the future.

Yas girl, you know when you just can’t anymore with the Starbucks line? Here’s how to say it with poder!

El poder, when used as a noun, means power. This can be real sovereign power or invented magical powers.

“El rey tiene mucho poder.”
The king has a lot of power.

You can’t/are not allowed to forget this powerful verb! Feeling poderoso yet?

In this article, we have covered:

But no verb can be perfected without practice!

Test your skills and see what you’ve learned from this article by playing a selection of sentences with the various forms of the Spanish verb poder: 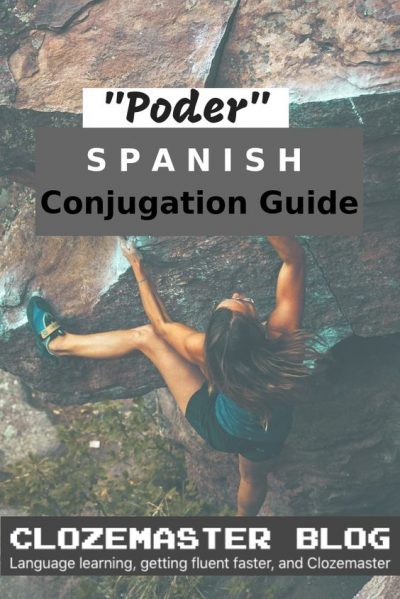