There’s no easy way to put this – learning a new language is tough.

It requires dedication, hard work, and lots of free time to learn all the vocabulary and grammar needed to become fluent. Unfortunately, many people who begin learning a new language give up when things start to get challenging. Ask them why and you’ll hear a variety of excuses.

I don’t have enough time to study.

There are too many words to learn.

I just don’t have the talent for languages.

But for every person who gives up learning a new language, there are hundreds of people who are on their way to mastering a third, fourth or even tenth language.

Currently, I’m living in Sweden and learning Swedish… In one week I’ve gone from barely understanding anything, to being able to listen to radio and podcasts with pleasure! – Shadowzergsz

My passion for language learning has been so dead for the past few months. I couldn’t seem to even want to buckle down and study anything – even listening to foreign music wasn’t enjoyable… Suddenly, language learning is fun again!
– DerSprachKerl

My French reading has improved so much in the past 3 months that I feel like I am close to reading at normal speeds. Japanese I have finally been able to recognize different kanji, and Hungarian I have completed the first 100 words. – Laura

You may assume that these people are all geniuses with a natural talent for learning languages. But the truth is that they’re all normal people – they’ve just found a more efficient way to study.

So what’s their secret?

Using cloze tests to practice 5 skills at the same time

They’re all Clozemaster students who have been using cloze tests to help them learn languages up to 5x faster than normal. Cloze tests are a kind of exercise where the participant has to replace the missing word in a sentence. They require the ability to understand both context and vocabulary to find the correct answer.

The reason that cloze tests are so effective for language learning is simple. When you complete a cloze test, you’re not just practicing one skill – you’re actually practicing five skills at the same time.

Let’s take a look at some of the skills you can learn using cloze tests.

Flashcards are used by almost every language student around the world and they can be effective for learning large amounts of vocabulary. However, regular single-word flashcards are too simple. As each card only has one word, it takes a long time to learn enough words to become competent in your target language.

Cloze tests are much more efficient for learning vocabulary because you’re exposed to multiple words at once. To answer the question correctly, you’ll need to understand each word in the sentence – what it means, how it relates to the other words, and how it’s affected by context.

As you work through more and more cloze tests, you’ll find that you start to passively pick up new words.

Here’s an example from Clozemaster’s French Fluency Fast Track that you can try yourself.

A sample sentence you might encounter early on is:

I believe in him.

After repeating this sentence a few times, you should be able to remember that the French word for “him” is “lui”.

Do you believe in UFOs?

From the previous cloze test for “lui”, you can probably recall that the French word for “believe” is “crois”. Using cloze tests you’ve learned two new words (“lui” and “crois”) from studying just one card. If you continue working on the Fast Track, you could potentially master two or three hundred new words from studying less than a hundred cards – a much more efficient way of studying vocabulary.

When you start using your target language in real-life situations, you’ll find that words are rarely used in isolation. Whether you’re watching a movie, listening to the radio, or having a conversation in a cafe, you can’t just translate a single word at a time. You need to be able to translate whole sentences on the go.

Translation is just like any other skill – it requires practice in context. When you’re learning the piano, you can spend hours learning the positions of every single note on the keyboard. But this doesn’t mean you’ll be able to play a song. To play a song, you need to practice putting the notes together into a sequence that sounds good.

Learning a language is the same. You may spend hundreds of hours studying single words. But without practice in context, you won’t be able to use them in sentences.

Cloze tests let you practice this important skill. Instead of just studying single words, you study vocabulary presented in whole sentences. Each time you practice a new card, you’ll not only learn new words and phrases, you’ll improve your ability to quickly translate entire sentences.

Clozemaster Pro users can level up their translation ability even faster by studying multi-paragraph passages taken from native level texts. There are passages covering a variety of topics such as Arts, History, People, and Technology, so you’ll always have something interesting to read.

One of the keys to making quick progress in a second language is learning “chunks” of words instead of single words. A chunk is a short phrase that combines several words. It could be an idiomatic expression, such as “How’s it going?”, or a combination of words that frequently appear together, such as “heavy snow”.

Native speakers usually have no problem understanding chunks as they start learning them naturally from a very early age. But if you take a look at the meaning of each individual word in the chunk, you’ll see why second language speakers have a hard time.

“How’s it going?” is a common greeting that could mean “Hello” or “How are you?” depending on the situation. But why do we use the word “go” when nobody is actually going anywhere?

When there’s a lot of snow, we use the phrase “heavy snow”. Isn’t it strange to refer to the weight of the snow when we’re actually describing the amount of snow? Surely “dense snow” or “thick snow” would make more sense.

Learning chunks takes time, but cloze tests allow you to speed up the process by integrating your regular vocabulary studies with chunk studies. Studying words in chunks will help you discover common words that have multiple meanings. More importantly, you’ll learn to quickly identify when to use the regular meaning (eg. a heavy book, a heavy bag) and when to use the idiomatic meaning (eg. a heavy drinker, heavy taxes).

Clozemaster makes it easy to learn important chunks as example sentences are presented based on their frequency of use. You’ll learn all the most commonly used phrases first, so you’ll be able to start using “real language” as quickly as possible.

Skill 4 – Learning to Transition from Passive to Active Vocabulary

When you start learning new words, they’ll become an important part of your passive vocabulary. With enough study, you’ll be able to recognize and understand them when they appear in text or conversations.

But real communication is a two-way street. To become fluent in a language, you need to be able to use the language, not just understand it. This means transitioning as many words as possible from your passive vocabulary to your active vocabulary.

When sitting down for a study session, most students are forced to make a choice.

Should I focus on learning new words to build my passive vocabulary, or practice familiar words to reinforce my active vocabulary?

Students using cloze tests have a distinct advantage because they don’t need to make this choice. Cloze flashcards allow you to grow your active and passive vocabulary at the same time. By constantly studying words in context, you’ll reinforce your active vocabulary with every sentence you study.

Ask Fred, a dedicated student who is using Clozemaster to study French and Czech.

I find that continued listening snowballs into a powerful learning experience as the language takes stronger root in my memory. Also, it helps me expand my vocabulary and range of expression through new sentences and repeated exposure to grammar in an organic way. This tool is a mainstay of my daily Czech and French routine.

Clozemaster users have an extra incentive to increase their active vocabulary. While each new word studied gives you points toward your total score, using the text input option (ie. using your active vocabulary) gives you bonus points. As your score increases with each new word studied, you’ll find yourself striving to reach the top of the leaderboard. Clozemaster users like rkirktransl8s have found this to be great for motivation.

This will sound silly, but the leaderboards are a great motivator to get my daily practice in. I consider myself pretty serious about my language study, so seeing other people surpass me on the boards helps kick my rear in gear to put in more time and work more efficiently.

Mastering a language requires more than just learning lots of vocabulary. You also need to learn grammar so you can construct sentences properly. Unfortunately, learning grammar is often regarded as the most challenging (and least interesting) part of studying many languages. Just ask anyone who’s tried to understand all 18 cases used in Hungarian.

Many students take a “one or the other” approach when studying vocabulary and grammar. They might spend an hour studying a few common grammar rules, then an hour studying new words. Students using cloze tests have a big advantage as they can study grammar and vocabulary at the same time.

Here’s an example from the Clozemaster Japanese course:

I’ll do my best not to disturb your studying.

(Lit: I your study to not disturb will do my best.)

To successfully answer this question, you need to learn that Japanese has a different word order to English (Subject-Object-Verb vs. Subject-Verb-Object). Many students of Japanese claim that one of the hardest parts of learning Japanese is getting used to the SOV word order.

When you study language using cloze tests, you’re constantly practicing grammar patterns in context. Japanese language students will be able to repeat SOV sentences over and over until the word order becomes second nature. Many students find that sentence repetition is just what is needed to help finally unlock the mysteries of a difficult language.

Before I started with Clozemaster, I had trouble reading Polish sentences/syntax even though I had a decent vocab level. Reading thousands of sentences has given me a natural sense of how Polish tends to structure itself, making reading any texts much easier.

Clozemaster Pro users can take advantage of bonus Grammar Challenges that are included with many popular languages. Grammar Challenges let you focus on specific grammar points, such as prepositions, pronouns or commonly confused verbs.

The free version of Clozemaster comes with everything you need to accelerate your language learning, but if you’re serious about mastering a language, you should check out Clozemaster Pro. The Pro version comes with even more example sentences, unlimited listening exercises, customizable settings, advanced stats, and downloadable content. Try Clozemaster Pro at https://www.clozemaster.com/pro. 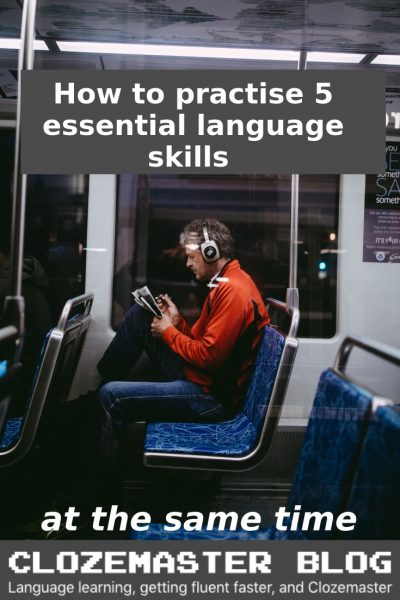