“Ask and You Shall Receive” is one of those age-old sayings that everyone repeats but no one really applies. How do you know what to ask for? How do you know if it’s the right time to ask? What happens if someone says no to your request? Most difficult of all, how do you ask for something in a different language? In this article, we’ll go over the Spanish verb pedir, meaning to ask. More specifically, we’ll look at pedir conjugation. By the end, you’ll know exactly how to ask for what you need, no matter the circumstances.

We’ll also look at some of the interesting differences in meaning within the verb pedir, and some common idioms and expressions using the verb, to add some ease in your day-to-day conversations. Let’s get started!

What Kind of Verb is Pedir?

If you’ve been reading all the articles for Spanish conjugation on this blog, you’ll already know that many of the verbs we cover are irregular. Pedir is yet another verb that likes to break common conjugation rules for verbs ending in -ir, -er, and –ar. This is what makes pedir irregular. While you might be used to irregular verbs already, it’s important to go over the specifics of each of them. That’s because unlike regular verbs, you can’t really predict how it will be conjugated based on your knowledge of other verbs. Let me give you an example:

The Spanish verb vivir, meaning to live, also ends in “ir” but is a regular verb. That’s because no matter how it is conjugated, its stem never changes, remaining “viv” for all tenses and subjects. For example: yo vivo (I live), tú vives (you live), el/ella vive (he/she lives)… as you can see, the stem of the verb always remains the same, no matter how the verb is conjugated.

This rule doesn’t work for pedir. Instead of its stem always being “ped”, it changes depending on different subjects and verb tenses. For instance, to say “I ask”, you say “yo pido”. We’ll go over the intricacies of this verb in considerable detail below. While it may seem like a daunting task to learn all these irregular verbs by heart, the Cloze Collection at the end of this blog post is a really good tool to practice with. Soon, you’ll have memorized pedir so well that conjugating it will just be like muscle memory!

If you’re looking to practice conjugating other irregular Spanish verbs, why not try some of the Cloze Collections on other articles? Check out “dormir” (to sleep), “venir” (to come), and “oír” (to hear) for some more practice.

Unlike in English, where there is a difference between asking and ordering, both of these verbs collapse into a single one in Spanish. Pedir can mean “to ask”, “to order”, “to call for” and even “to apologize”! That’s why pedir is such a valuable verb to know, because it is so versatile that you’ll be able to use it in lots of different contexts.

Now, let’s look at a few example sentences for the different meanings of pedir:

“No te olvides de pedir ayuda si la necesitas” -> Don’t forget to ask for help if you need it.

“La fiesta está lejos, mejor pedimos un taxi” -> The party is far away, it’s best if we call a cab

“Le tuve que pedir perdón a María, porque sin querer le he roto el móvil” -> I had to apologize to María because I accidentally broke her phone.

Another note of caution that is good to keep in mind between Spanish and English is that the Spanish verb “ordenar” sounds a lot like “to order” in English. Don’t let this similarity fool you though. Ordenar means “to organize”, not “to order”. When you want to say “to order”, make sure to use pedir.

Now, let’s move on to some of the more potentially confusing aspects of Spanish verb conjugation. After all, it’s best to get the harder stuff out of the way so that the rest just seems like a breeze. Let’s look at pedir’s verbals. The only reason verbals can be confusing is because, despite their name, verbals exist when verbs don’t act like verbs in a specific sentence. Instead, they can act like nouns, adjectives, or adverbs. So, if you ever encounter a sentence where you notice an unconjugated version of the verb “pedir”, alongside a conjugated version of another verb, odds are pedir is operating using its verbals. Let’s go over three of pedir’s verbals: the infinitive (infinitivo), the gerund (gerundio), and the participle (participio).

The infinitive of the verb “pedir” is simply “pedir”. Easy, right? That’s because you use it in sentences when pedir is just a qualifying word for another active verb.

For example: “¿Mamá, puedo pedir un libro nuevo?” means “Mom, can I order a new book?” In this case, the acting verb is “poder” (to be able to), rather than “pedir”.

The gerund of “pedir” is “pidiendo” (asking). We use it when the active verb in a sentence is “estar” (to be).

The participle of “pedir” is “pedido” (asked), and we use it when the active verb in a sentence is “haber” (to have).

For example: “Tenemos que irnos, ¿Has pedido ya la cuenta?”, means “We have to go. Have you already asked for the bill?” In this case, the verb haber is conjugated to “has” (have you), and pedido remains the same no matter how haber is conjugated.

Verbals can be quite difficult, so well done for taking them on so soon. Now let’s move onto the fun part (at least for us): Pedir conjugation tables! 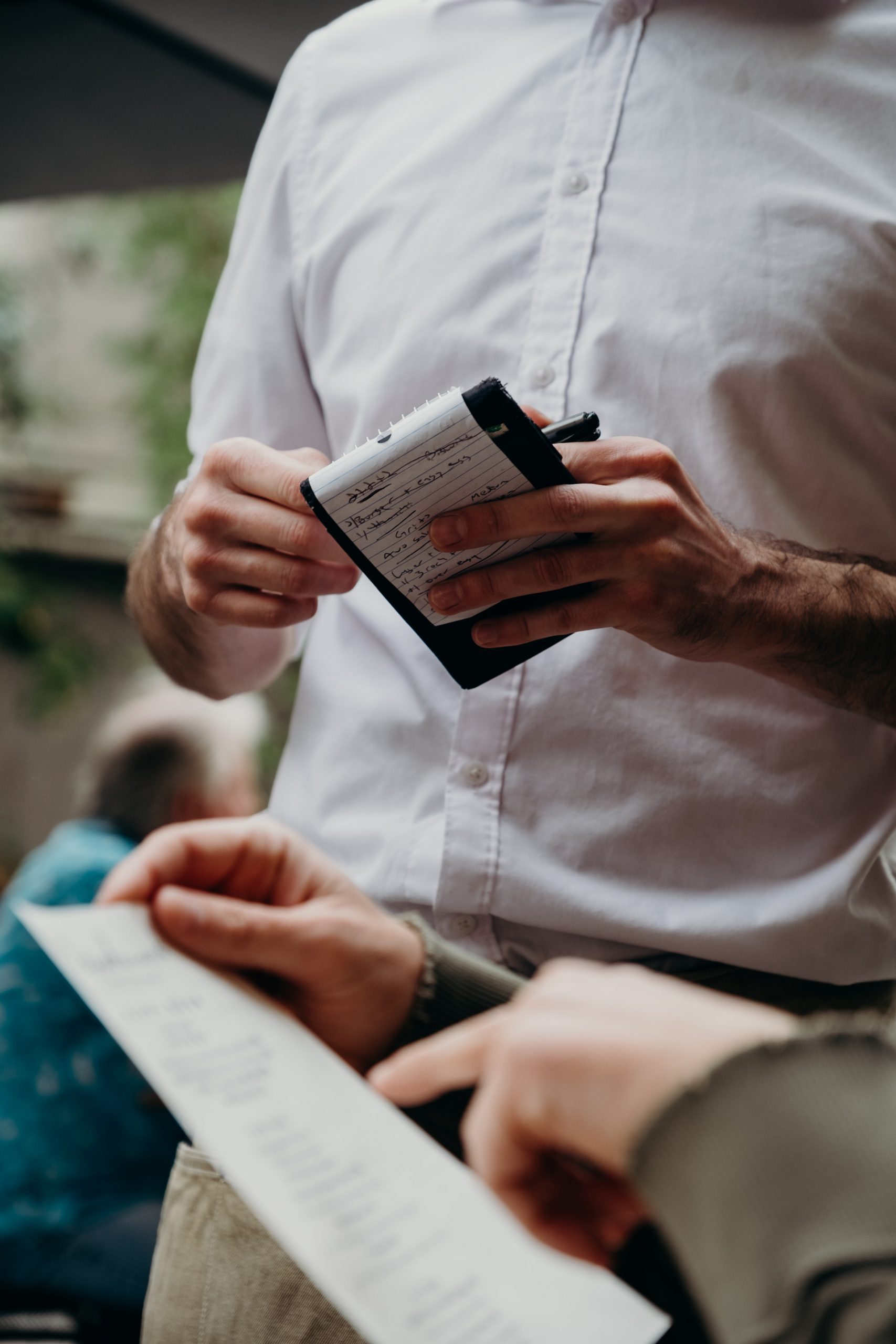 The fact that pedir is irregular shouldn’t scare you away from being able to conjugate it properly. Pedir conjugation can be easily mastered with the right foundation. The following conjugation tables and sentence examples should give you the right building blocks to start using this verb correctly.

Now that you know how to use pedir in the imperative tense, let’s explore some beginner conjugation tenses, beginning with the present tense (presente), two different versions of the past tense, perfect (perfecto), and imperfect (imperfecto) and the future tense (futuro). These should be relatively straightforward and easy to practice through the Cloze Collection at the end of this article.

Asking For It: Pedir Conjugation for Intermediate Learners

If you’re really enthusiastic about verb conjugation, fear not! There are many more tenses to go over for pedir. Next up, we’ll look at compound tenses blending the verb haber “to have” and pedir. These tenses are called pretérito perfecto compuesto (compound perfect preterite), which deals with the present, pluscuamperfecto (pluperfect) which deals with the past, and futuro compuesto (future perfect), which addresses the future.

Is This What You Asked For?: Advanced Pedir Conjugation

Amazing job working through all these different verb tenses! Pedir conjugation can be complicated, but with a little practice you’ll have mastered it in no time. Let’s end with something to add a little fun and ease to your Spanish vocabulary. There are many different expressions and idioms that use the verb pedir, which can add lots of great fluency to your conversations. Here are just a few of them:

In this article, we’ve really done a deep dive into the important fundamental tenses for pedir conjugation at the beginner, intermediate, and advanced levels. We’ve also looked at some of the verbals for pedir, and some of the different meanings that collapse into this one verb in Spanish. Finally, we ended with some common expressions and idioms using the verb so you can expand your vocabulary.

With all this information, you’re well on your way to mastering pedir despite the fact that it is an irregular verb. If you’d like some actual interactive practice, why not try out the specialized cloze collection at the end of this post, which specifically explores all the key lessons we’ve looked at today! Now, you’re more than ready to ask for (and hopefully get) whatever you want in Spanish!

Learning the pedir conjugation might seem daunting at first, but don’t worry, it comes naturally with practice.

Test your skills and see what you’ve learned from this article by playing a selection of sentences with forms of the verb pedir.