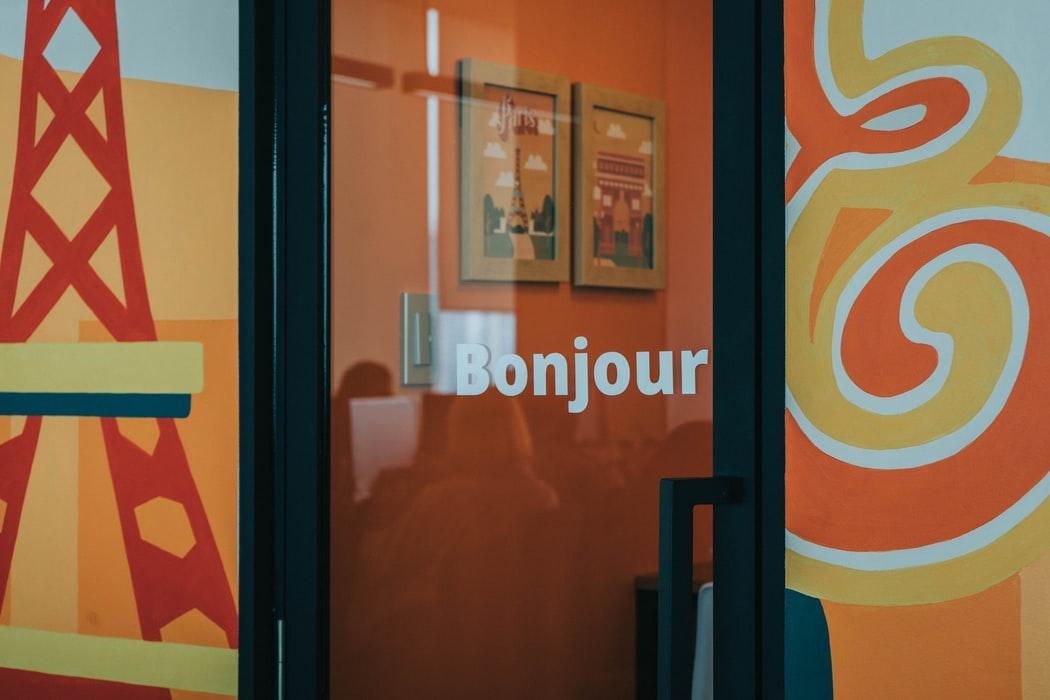 I think we can all agree that you’d struggle to find someone who doesn’t know that “bonjour” is French for hello. But how many people know other ways to say hello in French? There are different French greetings at different times of the day, and on top of that, there are also different words to use when speaking to your friends, or even when answering the phone.

Today we’re going to look at the basics, the formalities, and everything in between!

The most common way to say hello in French is of course “bonjour”. This literally means good day and can be used for good morning in French too. This is used all day until around sunset, when you should stop saying bonjour and start saying “bonsoir”, which means good evening in French.

This is something that can be difficult to get used to, because native English speakers have the habit of just saying “bonjour” as we would “hello”, but a French person would never say “bonjour” at night, unless they’re not thinking straight!

Another important thing to note is that you can address someone directly by adding their name to the end of the word “bonjour”:

If you want to go one step further and wish someone a warmer welcome, then I would recommend the phrase “Bien le bonjour”. This is similar in meaning to both “good day” and “well hello”, and sounds overall more cheery than a plain “bonjour”.

Hello Everybody! in French

There are several different ways to say “hello everyone” in French, but they’re all centered around the word “tout”, meaning all:

Later we’ll look at formal greetings, and that’s where you’ll learn how to politely say hello in French to men, women and large crowds.

If we can say good day and good evening, then surely we must be able to say good morning or good afternoon in French too? Actually, we can’t. While we would say “good morning” in English to greet people before midday, this is not the case in France. French people stick to the usual “bonjour”. That said, if you’re wondering how to say hello in French Canadian then look no further. In Canada, particularly in Quebec, we can say “bon matin”.

As far as afternoons are concerned, there’s no other special way to say hello during the day until the evening.

The following terms are all used to wish someone a good day in French, and cannot be used as a greeting:

Next, we’re going to look at the slightly more informal ways to say hello in French, notably the widely used “salut” and “coucou” which both translate loosely to hi in French.

“Salut” can mean both hi and bye, similar to the Italian “ciao” (speaking of ciao, the French use that to say goodbye too!). While “hi” can be said in English in almost any situation without raising any eyebrows, the same cannot be said for “salut.” This kind of greeting should only really be used to address people you know, be it close friends or just acquaintances, it’s just not something you’d say to a complete stranger.

Remember: the ‘t’ at the end of “salut” is silent!

“Coucou” is used slightly less often. It is extremely common amongst children, but adults do use it when speaking to women too, if it’s a female friend or family member. Some parts of the French language are slightly outdated, and this might just be one of them, because a man would never greet another man with “coucou” unless they were joking around. In any case, know that this is very informal, and certainly isn’t a greeting you should say to your boss! When in doubt, leave “coucou” to the kids.

Both of these French greetings are also commonly used by text message and online, though they are usually shortened. The ‘text-talk’ versions are “slt” (for salut) and “cc” (for coucou). For example:

Now that we’ve covered the informal greetings, let’s look at the opposite: formal greetings in French. This is an easy thing to learn, as you just have to address the person you’re speaking to more politely with sir or madam, or their name if you know it.

To elaborate, the French president would address the public using the highly formal “Mesdames, mesdemoiselles, messieurs, bonjour” (ladies, young ladies, gentlemen, hello). This is the most formal way to address a group of people.

On the contrary, “messieur-dames” is an abbreviated term for ladies and gentlemen that is actually informal as it isn’t grammatically correct, yet it is very polite. It is used to say hello to a group of several men and women, for example saying hello when entering a shop, or the way a Maître D’ might greet a group of both male and female diners in a restaurant.

This comes as a surprise to everyone, because it simply doesn’t sound French! When francophones answer the phone, they say “âllo”. This might sound like the English “hello”, or even the German “hallo”, but it actually comes from Hungarian.

Tivadar Puskás invented the telephone exchange, and when testing his incredible invention back in 1877, he said “hallod?” meaning “can you hear me?” in Hungarian, to which the response was “hallom, hallo” (I can hear you, I’m listening).

This short exchange between the two gentlemen has since been simplified to the last part: Hallo (I’m listening).

French people tend to answer the phone as if they’re asking a question, with the intonation rising at the end. It’s almost as if to say, “Hello, what do you want?”, all in one short and simple word.

The person making the phone call, however, wouldn’t necessarily reply with “âllo”. They could simply say “bonjour” and introduce themselves, typically with their name followed by “à l’appareil”, meaning “on the phone”.

Here’s a word that doesn’t have an exact English equivalent, but you’ll recognize the word if you know your prefixes! If a word comes from Latin and it starts with “re-” then it means “back” or “again”. Here, “rebonjour” simply means hello again.

It’s not uncommon to hear people say “rebonjour” when they greet someone for the second time on the same day. It might be when you go back into a shop because you’ve forgotten something, or when you bump into someone twice in one day.

Helpful hint: When you want to say you did something again in French, you can always add “re” before the verb, for example remanger, redemander, refaire, récrire/réécrire (eat again, ask again, re-do, re-write).

Excuse Me in French

This isn’t so much how you would greet somebody, but it’s definitely how you would get their attention. “Excusez-moi” means excuse me in French, and is polite so can be used to address strangers, as opposed to family or friends. The informal equivalent is “excuse-moi”.

If you approach somebody with “excusez-moi” then it’s apologetic, so it’s good for asking for assistance in a shop, or trying to get a stranger’s attention because you need help.

Our first slang word that French youngsters use is what the French call “verlan”, backward words. The word verlan itself is “l’envers” (meaning back to front) pronounced back to front. Confused? It’s okay, you can learn more about backwards words later, but for now we’re just going to focus on one word: jourbon.

If you split bonjour in half you have bon and jour. Now flip them back to front, and you have “jourbon”, your first slang word for hello.

Finally, I’m going to tell you a few more ways to say “hello” in French slang, but please don’t use them when speaking to your elderly neighbours or in a work meeting, or you’ll get us both in trouble! These words tend to only be used amongst young people, or on the internet.

The first one is a term that you’ll probably recognize, Yo! This of course comes from American rap, and is used by French teens and young adults.

English isn’t the only language to influence French vocabulary. The slang term “Wesh” comes from Arabic, and is also used to mean “hiya” or “hey”.

And finally, “kikou” is a variation of “coucou”, which we saw earlier. It is used almost exclusively on the internet; in chat rooms and on social media.

Youngsters aren’t the only ones to use English words more and more. Don’t be surprised if an older French person who barely speaks a word of English walks into a room and says “hello”.

There you have it, a whole variety of different ways to say hello in French. Now that you know how to greet people both online and in real life, in different situations and at various times of the day, all that’s left to do is go out and make small talk.