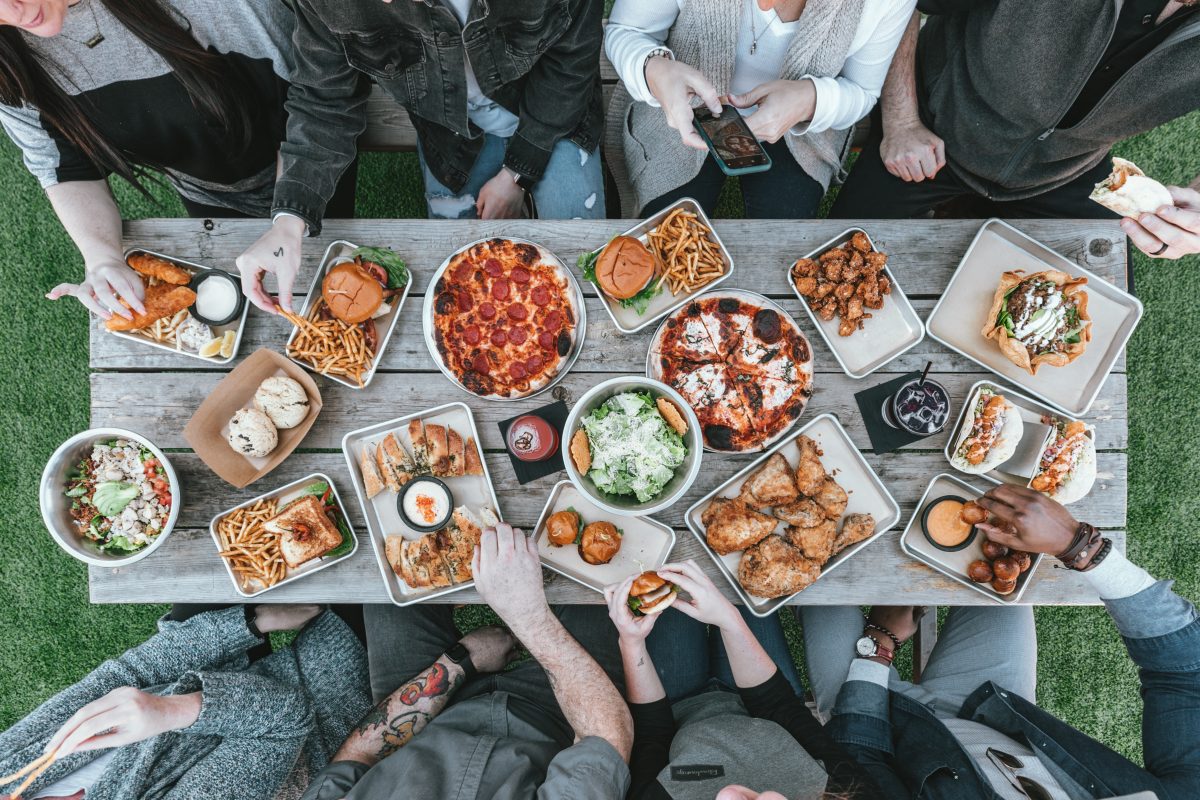 Eating is one of the most important activities in our day. We tend to eat at least three meals each day: breakfast, lunch and dinner. In this article, we’ll focus on lunch, which in Spanish is not just a meal, but also has a verb form: almorzar (to have/eat lunch). As per usual, we’ll go over the almorzar conjugation starting from the basics and including some extra information at the end of the article.

Are you ready to have lunch? Better eat before it gets cold!

What Kind of Verb is Almorzar?

Almorzar is a stem-changing verb. This means that some of its conjugations have changes on the stem of the verb—i.e., the part that comes before the ending (in this case, the ending is “ar”). There is only one stem change when it comes to almorzar: the “o” sometimes turns into “ue” (for example, in “almuerzo”, as we’ll see below).

If you want to learn more about stem-changing verbs in Spanish, take a look at this article on the topic.

Now that you have an idea of what kind of verb almorzar is, we’ll get into its conjugation. We’ll start by looking at its verbals: the infinitive, the gerund, and the participle. Verbals actually function as nouns, adjectives and adverbs and not as actual verbs, which might sound a bit complicated. But don’t fret! After we look at some examples, you’ll see that you’re up to an easy start with the almorzar conjugation.

Almorzar Conjugation for All Levels

The appetizer: almorzar conjugation for beginners

We are sitting at the table and it’s time to start eating! As we’ve seen in previous articles, there are 10 tenses in the indicative mood in the Spanish language. For the appetizer, we’ll go over the most common and simplest forms for the almorzar conjugation to start us off: presente (present), pretérito imperfecto (imperfect preterite, a form of the past tense), pretérito perfecto (perfect preterite, another form of the past tense) and futuro (future).

The appetizer was great, now it’s time to tackle the main dish. Let’s kick it up a notch and focus on the compound tenses of the almorzar conjugation in the indicative mood.

When it comes to compound tenses in Spanish, the trick is mastering the haber conjugation. The only form of almorzar that is used here is the participle “almorzado”. Compound tenses in Spanish are formed with the correct form of the verb haber + the past participle of the verb in question (i.e., almorzado), which is the one that carries the meaning.

Below you’ll find the pretérito perfecto (preterite perfect), pluscuamperfecto (pluperfect) and futuro compuesto (future perfect) tenses for almorzar. You may also want to take a look at our article on the haber conjugation.

We’ve gotten to the best part of our three-course meal: dessert. It’s time to take a look at the subjunctive mood. This Spanish mood is rather abstract; it is used to express doubts, emotions, desires, and the unknown. Below, we’ll look at its presente (present), imperfecto (imperfect) and futuro (future) tenses for the almorzar conjugation.

Nowadays, the subjunctive future is rarely used in speech and you are more likely to find it in literature or legal contexts. We haven’t added a conjugation example for the almorzar subjunctive future here as you are very unlikely to come across it. However, we believe it is good for you to know it exists and what it looks like.

If you’re still feeling hungry, you’ll find some extra tenses of the almorzar conjugation in this section. We have the condicional simple (simple conditional) and the condicional compuesto (conditional perfect), as well as the imperative, in the table below.

If you want more info on this topic, you can take a look at this article on Spanish conditional tenses.

Almorzar is not the only verb in Spanish that refers to a specific meal. There are three others that we’ll go over briefly below.

Although there are differences food-wise, breakfast is quite a similar morning meal in Spanish-speaking countries.

In Spanish-speaking countries, there is usually an extra meal in the afternoon or evening (generally between 4 and 8 p.m., depending on the country), which is similar to breakfast. People usually have some snacks at this time, maybe some tea or coffee and some baked goods. Other options include juice, yogurt or fruit.

Dinner usually takes place from 8 p.m. onwards and can be as late as 11 p.m. or 12 a.m. in some Spanish-speaking countries such as Argentina or Uruguay.

Before we wrap our lunch up, we thought you might want to look into some essential table manners in Spanish. Whether you find yourself in Spain or any of the many Latin countries, these will prove valuable.

Before you start eating, it is customary to use phrases such as ¡Buen provecho! o ¡Que aproveche!, both of which mean “Enjoy your meal!”.

Keeping your elbows on the table while eating is considered rude, so it’s best to keep them off.

We Spanish-speakers love to talk, and we take advantage of meals to catch up with friends and family.

This is probably not surprising, but you should avoid slurping and burping at the table.

We hope this guide of the almorzar conjugation has proven useful and answered whatever questions you had about this verb. If you are looking for more information about Spanish conjugations in general, you can take a look at our overview of Spanish tenses. If you want tips on how to learn Spanish on your own, you can also check out our article on this topic. Hope you have a great lunch!

Learning the almorzar conjugation might seem daunting at first, but don’t worry, it comes naturally with practice.

Test your skills and see what you’ve learned from this article by playing a selection of sentences with forms of the verb almorzar.