The Spanish verb traer (to bring) brings us tons of questions: what is the meaning of traer? How do I conjugate traer? What are the uses of the verb traer? Well, you’ve come to the right place!

Welcome to your Crash Course on Traer! Today, we are going to 1) certify you in all meanings and of the Spanish verb traer, 2) introduce you to all the verb tenses of traer, and finally 3) include practical real-world experience to get you speaking ASAP!

We have laid out your curriculum in the following tenses:

6. If I had brought, I would have brought… (si hubiera traído, habría traído…)

6 Different Uses of the Spanish Verb Traer in English

In this section, we will talk about the different uses of the Spanish verb traer, so that you won’t get lost in the example sentences below!

Voy a traer una botella de vino.
I am going to bring a bottle of wine.

Desafortunadamente no traigo dinero.
Unfortunately, I have no money on me.

¿Qué traes esta noche?
What are you wearing tonight?

La revista no trae fotos.
The magazine doesn’t have any pictures.

Me traje dos libros para el viaje.
I brought with me two books for the trip.

In Beginners traer, we will start with the easy tenses that you use every day (I bring, I brought, I will bring, I used to bring…). Then we’ll look at example sentences using one conjugated verb.

OJO! Traer has two irregularities which need to be memorized:

Let’s put the conjugation table into practice. Check out these example sentences:

In Intermediate traer, we move from one conjugated verb per sentence to two. We cover the imperfect subjunctive and conditional that enable us to talk about hypothetical situations in Spanish.

A Match Made in Heaven: Imperfect Subjunctive and Conditional

As mentioned in our sister crash courses on the verbs dar and poner, imperfect subjunctive & conditional are a match made in grammar heaven, total BFFs.

The most common example is the following: What would you do with a million bucks? In a hypothetical situation, you might say:

“If I had a million dollars, I would buy a castle”

For the verb traer, the imperfect subjunctive is brought (trajera), and the conditional is would bring (traería). Now, let’s get to dreaming about some hypotheticals!

The following sentences show how the BFF verbs from above form hypothetical sentences. The if of the hypothetical is highlighted in red:

**If you want to bring someone with you, you must use the preposition “a” (traer a alguien)

In advanced traer, we cover more advanced conjugations: past perfect subjunctive and perfect conditional. We will break down the meanings of these tenses and add example sentences that you can memorize or make your own!

The Perfects: Past Perfect Subjunctive and Perfect Conditional

In advanced Spanish, we move up from two verbs per sentence to four!

A Breakdown of the Shoulda Coulda Wouldas of Spanish

The shoulda coulda wouldas of Spanish, as seen in sister articles dar and poner, are the perfect combination of perfects: past perfect subjunctive + perfect conditional.

“Si hubiera traído, hubiera dicho, si hubiera hecho…”
(If I had brought, if I had said, if I had done…)

In these tenses, we use the auxiliary verb haber (to have) + the verb traer in it’s past participle (traído). (Click here for Spanish Past Participles and Lazy Grammar Hacks!)

We love using perfect tenses because we just need to know how to conjugate haber. This is an example with the verb traer, but any verb can follow this pattern.

Take a look at these advanced examples of traer below!

Wrapping Up the Crash Course

You made it! You brought your best game (trajiste tu mejor!) and we’re proud of you!

But before you spread your wings and are ready to take on the world, check your traer skills with Clozemaster!

Test your skills and see what you’ve learned from this article by playing a selection of sentences with various expressions employing the Spanish verb traer: 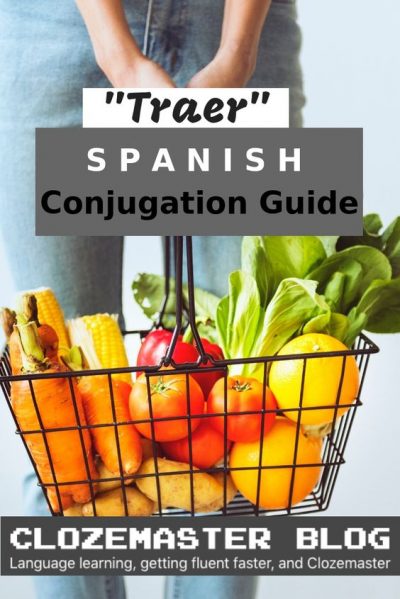