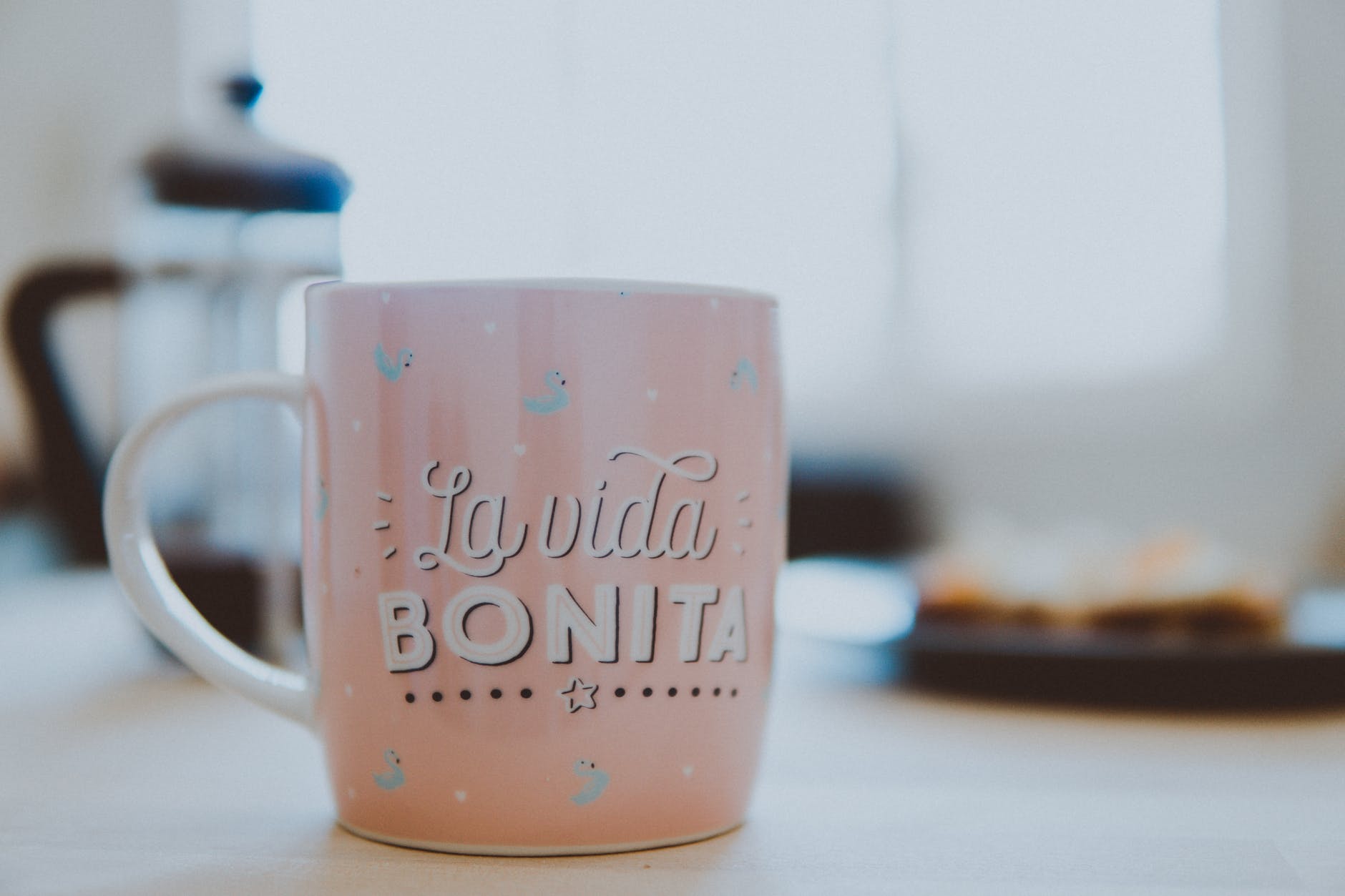 Spanish adjectives are an essential part of speech, but they can also be a little complicated for learners to master, especially if you have not studied a similar language before. This is because unlike in English, Spanish adjectives change depending on the gender and number of the noun. The rules are actually pretty simple, but it can be hard to master and remember in practice.

So let’s talk through the rules, and then you go practise with Clozemaster, yes?

What is an adjective?

I know many of us don’t remember grade 6 English class and the difference between a noun, adjective, verb, and so on. It’s just useless information we never use in real life, you say? Well, now that you’re learning Spanish, your life will be a lot easier if you understand these terms. So let’s do a quick recap.

An adjective is a “describing word”. It’s a word that is used to describe a noun (a person, place, or thing). Some English examples are happy, bad, small, wise, and interesting.

The Spanish adjectives you will hear and read very regularly are:

Of course, there are thousands more adjectives in Spanish. But if you start by learning the basics, like Spanish colors, feelings, and personal descriptions, then you’ll have most daily conversations covered. 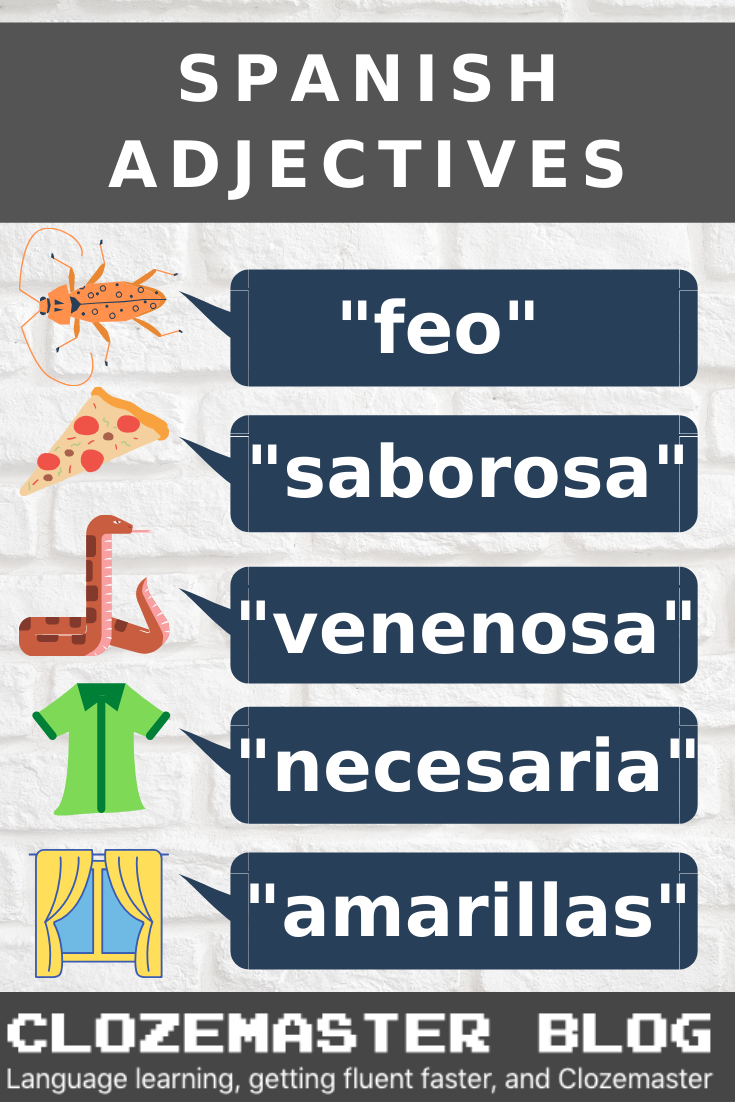 In English, adjectives either go before the thing they are describing, like “red house”, “smelly cat” or “hard rock”; or they go after a copula verb, like in “the girl looks angry,” or “the ball is flat”.

In Spanish, just remember that the adjective always follows the noun, whether it is in a sentence or in a phrase with a noun. So the English “red house” becomes “casa roja”, and “the baby is sad” follows the same structure as in English: “el bebé está triste”.

There are exceptions to this rule, though.

Spanish adjectives that appear both before and after the noun

Some Spanish adjectives can be placed both before and after the noun, and depending on their positions, they give different meanings. I consider this a very advanced topic because the differences in meaning are usually very nuanced. Here are some more common examples of those:

tu única oportunidad | your only opportunity

mi nuevo celular | my new (to me) cellphone

mi celular nuevo | my new (from the store) cellphone

Spanish adjectives that only appear before the noun

Finally, there are a small number of adjectives that only appear before the noun, or after a verb. These tend to be superlative adjectives. These adjectives change to plural forms before plural nouns, but they do not change regardless of the gender of the noun.

You might be wondering how an adjective can be masculine, feminine, or plural. Well, the key is that Spanish adjectives do not have inherent gender or plurality as nouns do. They simply copy the form of the noun they are describing. This means that the adjective will match the noun it is describing in both plurality and gender.

How to use the right Spanish adjective form

So to figure out which adjective form to use, you need to first look at the noun you want to describe. Then, answer the following questions to work out the adjective form:

Now that you have figured out the gender and plurality of the noun, apply it to the adjective.

Let’s look at an example noun, and go through the questions.

So, we have a masculine, plural noun. How would you add the adjective feo (ugly) into that phrase?

You need to make sure the adjective is masculine and plural. The default format already ends in -o, so we know it is masculine. And to make it plural, we just need to add an -s. Finally, remember that the adjective should come after the noun.

Let’s try that in a longer sentence now.

So, we have a feminine, singular noun. How would you replace the word aquí with the adjective frío (cold) in the correct form?

Change the ending from the default -o to -a. Since it’s singular, you don’t need to add an -s. So we get la cerveza está fría. to mean “the beer is cold”.

Now you try it on your own. The following sentences include adjectives only in the default (masculine, singular) form. The adjective of each sentence has been bolded to make it easier. It’s your job to decide if they’re correct, and if they’re not, correct them.

(To find the correct forms, scroll down to the bottom of this blog post or just click here.)

The more you practice this, the more you will get your head around it, and it will come to you more easily in conversation.

Some Spanish adjectives do not change form from masculine/feminine and singular/plural.

These forms are increasingly less common, especially in Latin America, and are starting to be changed anyway. For example, “rosa” can become “rosado” and “naranja” can become “anaranjado”. Nonetheless, here are some examples of adjectives that can be left unchanged, no matter what the noun is.

Possessive forms like mío (mine) and tuyo (yours) also function as Spanish adjectives. The difference, though, is that possessives ususally only come after verbs in full clauses (although there are exceptions). When this happens, the possessive must have the same ending as the noun. Some examples of the possessives being used as adjectives:

Note: If you’re not sure how to use the possessives in Spanish, it’s explained in our article about Spanish pronouns.

The kind of verbs that can be followed directly by adjectives are called copulas. The list of copulas in Spanish is much longer than English, due to the flexibility of Spanish reflexives. So keep in mind that this is not an exhaustive list, and there are other verbs you can also use directly with adjectives like this.

Some examples of verbs you can use in sentences to describe Spanish adjectives are as follows.

Note: If you’re not familiar with the differences between ser and estar, here is a great article to explain it.

• creerse | to beleive oneself to be

Ana se cree guapísima, pero yo no creo que es. | Ana thinks she’s so beautiful, but I don’t think she is.

If you feel that you have mastered Spanish adjective agreement, and want to do something a bit more challenging, try to form some more complex sentences with the structures given below.

With this structure, you need to make sure you are still matching the article and the adjective with the masculinity and plurality of the noun. Even though you can’t explicitly see it, you are still talking about it, so the characteristics still need to match up.

With this structure, the adjective will always be masculine and singular (i.e: the default form). But you need to remember to use subjunctive in the second clause.

As you might have deduced from this article, Spanish articles are no simple topic. So take some time to learn how they work, look at the examples, and most importantly, practise using them. Remember that if you need to practise any language skills, Clozemaster is a pretty good place to start! 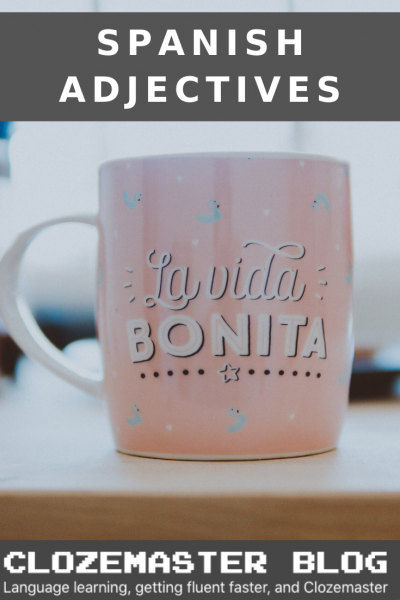