The months of the year in Spanish, or meses del año are fairly straightforward words that should be pretty easy to learn with a small amount of effort. You may have learned this pretty early on in your Spanish learning journey and just need a refresher, or you may be looking to teach yourself the months in Spanish.

Whatever your reasons for landing on this page, everything you need to know about the months in Spanish, and how to use them, is right here!

What are the months in Spanish?

In Spanish, just like in English, the months take their names from Roman Empire origins. So you will notice that all the months sound very similar to their English counterparts.

A couple of things you may notice about the months in Spanish:

How to remember the month names in Spanish

Now you know what the months of the year are, but how do you make them stick?

Some ideas to remember the months in Spanish are:

Grammar: Important things to know about the months in Spanish

The months of the year in Spanish are masculine and singular nouns. Although you won’t normally use them with determiners and adjectives, if you do need to it is important to remember this. And luckily all the months have this in common.

In Spanish, three months can be adjectives as well as nouns. These are:

These words are not used very often, but they are sometimes used in literature to describe things typical of the time of year pertaining to a given month.

You may wonder what happens if you want to describe something from a month that doesn’t have its own adjective. In these cases, you could just use de + (month) to achieve the same effect.

The months in Spanish are not capitalized

Unlike in English, the months in Spanish do not begin with capital letters.

Saying the date in Spanish

When saying dates in Spanish, the day always comes before the month. This is the case in both written and spoken Spanish. Spanish dates always use cardinal numbers, instead of ordinal like we often use in English. The structure of a date in full is as follows:

Abbreviating the month names in Spanish

The abbreviations of the months in Spanish are as follows:

When writing out dates in day-month-year format, the months will often be represented by Roman numerals, rather than numbers or letter abbreviations. For example, the 15th of June 2020 would be written as 15-VI-2020.

Using the months in Spanish in a sentence

When talking about months of the year in English, we almost always use a preposition before the month. The most common of these is “in”, as in “in January”. Luckily, this is the same in Spanish, and they use the word “en” when talking about something happening in a particular month.

Yo me voy a graduar en mayo. | I’m going to graduate in May.

The word “every” is indicated in Spanish by the word todo or cada. If you are wanting to emphasize that something happens every year in a certain month, you can just add the word “todo” or “cada” before the month.

Todo diciembre viajamos para la costa. | Every December we travel to the coast.

Before & after – antes & después

To use the words “before”(antes) and “after”(después) in a sentence in Spanish, we need both the word and the preposition, “de”.

So the correct construction is “antes de (month)”.

The word for until is hasta and does not require another preposition. So if we want to talk about something happening until a certain month, we simply say “hasta (month)”.

Voy a estar en Santiago hasta junio. | I will be in Santiago until June.

Te lo dejo hasta noviembre. | I’ll let you have it until November.

No vengo al centro comercial desde febrero. | I haven’t been to a shopping mall since February.

Mi hijo ha estado viviendo conmigo desde diciembre. | My son has been living with me since December.

Although you generally don’t need an article like “el” before the months of the year, talking about next is one of the few times you do need to include this.

Unlike the above words, next is not a preposition but an adjective. That’s why próximo should appear in between the article and the month, so it will look something like “el próximo (month)”.

Another way to express “next” in Spanish which is slightly more colloquial is que viene. This is an expression literally meaning “that comes”, and in a sentence, it comes directly after the name of the month. So, you should say “el (month) que viene”.

Those two expressions are interchangeable in meaning.

Just like “next”, “last” is also an adjective. However, the Spanish pasado is a more traditional adjective in that it comes directly after the noun, not before it. So, you will see “el (month) pasado” to mean the most recent time that month has passed.

“Este”, a determiner meaning this, is used before a month to talk about the upcoming month. We use “este” because it is a singular masculine determiner, and as you’ll recall, all the months of the year are singular and masculine.

Este julio mi tía va a dar a luz. | This July my aunt is going to give birth

Este septiembre mis abuelos se van a jubilar. | This September my grandparents are going to retire.

More on dates in Spanish

Hopefully this little guide has given you a good idea about what the months in Spanish are and how to use them! If you want to have a practise now using them in context, why not give Clozemaster a try?

Test your skills and see what you’ve learned from this article by playing a selection of sentences with Spanish month names. 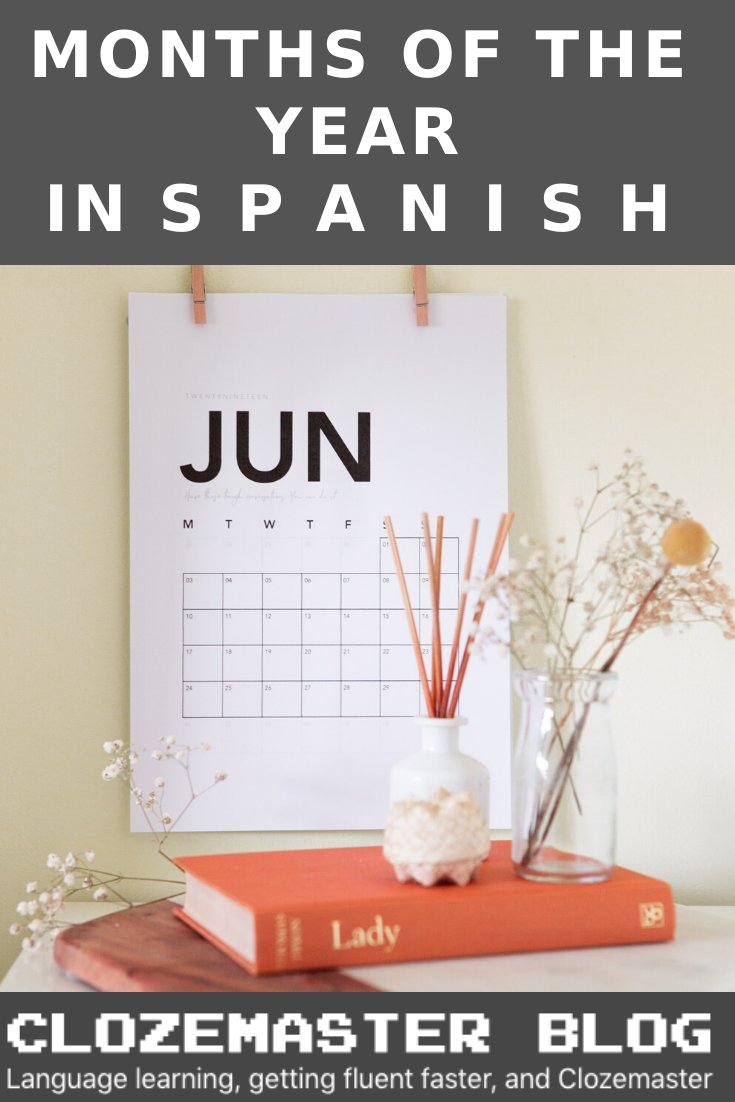