Italian prepositions, just like prepositions in any other language, are tiny language blocks which are incredibly important to ensure you deliver the right meaning.

You’ll find them in almost every sentence but there are significant differences with English. That’s why it’s important to spend some time learning which preposition to use and when.

At the end of this guide you’ll know what preposition to use in every context and you’ll have a complete reference to come back to any time you’re in doubt.

When they are not followed by an article, Italian prepositions are called “simple prepositions”. There are nine of them: di, a, da, in, con, su, per, tra, fra.

Di can be translated into English as “of” “from”, “about” and sometimes even “in”. When Di is combined with definite articles, it looks like this:

In case you don’t remember how to choose the right definite article before a name, you can jog your memory here.

Now, let’s see all the different cases where “di” is required:

1. It indicates ownership, similarly to the English possession with name + apostrophe + s or the English preposition “of”.

2. It indicates someone’s or something’s origins, same as “from”, but only when you want to say what city you are from. You cannot use di with country names.

3. It expresses what something is about (topic).

4. It tells you what something is made of.

5. Di is used to make comparisons, same as “than”.

6. It is used to specify quantities.

7. You use di to talk about a specific time of the day or of the year.

The preposition a is often equivalent of the English “in,” “to” or “at”. When a is combined with the definite articles, it looks like this:

1. To talk about a location and tell where something is or where someone’s going to.

2. To say when or at what time something will happen.

3. To say that you are giving something “to” someone.

The Italian presposition da means “since”, “from”, “by”.

1. Movement from a place.

2. A movement towards a person.

3. A past action that is still going on.

4. The agent in passive sentences.

English also has this preposition, although sometimes its use is different. When it’s combined with an article, it looks quite different.

“In” is used in Italian to indicate:

2. Movement to a place, but only before countries and regions.

3. Travelling with some means of transport.

4. A discussion about time (seasons and daily moments).

This preposition literally means with. It does not usually change in combination with an article. So, for instance, you will say “con il” o “con la”.

Con is used to indicate:

2. An instrument or tool (what you use to do something).

The Italian preposition su means “on” “onto” or over.

It is used to indicate:

1. That something is placed above something else.

2. The subject of a topic

It is used to indicate:

1. Movement to a place (where you pass through a place to reach your final destination).

2. A reason for something.

3. Time duration (for an action that is already finished).

The Italian prepositions “tra” and “fra” are synonyms and you can use either one or the other.

They mean “between” or “among” and are both used to indicate:

1. Something that is located between two things or places.

2. An alternative (between two things or multiple choices).

Differences between “Di” and “Da”

Both the prepositions “di” and “da” can be used to say that you come from somewhere, so how do you know how to use one or the other? For instance, you can say:

The difference is quite easy: with the verb “venire” (to come) you must use “da” while with “essere” you have to use “di”. The meaning of the two sentences is practically the same, but venire has a double use. You can use venire both to tell where your place of birth is or where you are coming from in a certain moment. For instance:

Differences between “a” and “in”

Similarly, the Italian prepositions “a” and “in” are both used to mean state in place and can be translated with the English preposition “in”. How to know which one is correct? Let’s see some examples first.

While English uses “in” for all cases, in Italian the rule is that you use “a” with cities and “in” for regions, countries, continents and big islands.

Where to put prepositions?

In Italian, prepositions are used in front of nouns or pronouns to show the relationship between them and the rest of the sentence.

Due to the significant differences with English, Italian prepositions are one of those grammar topics which require a bit more practice.

Don’t try to master them in a single day: they’ll probably only get you frustrated. Instead, listen to the use of prepositions by native speakers and check out the exercise we prepared for you! 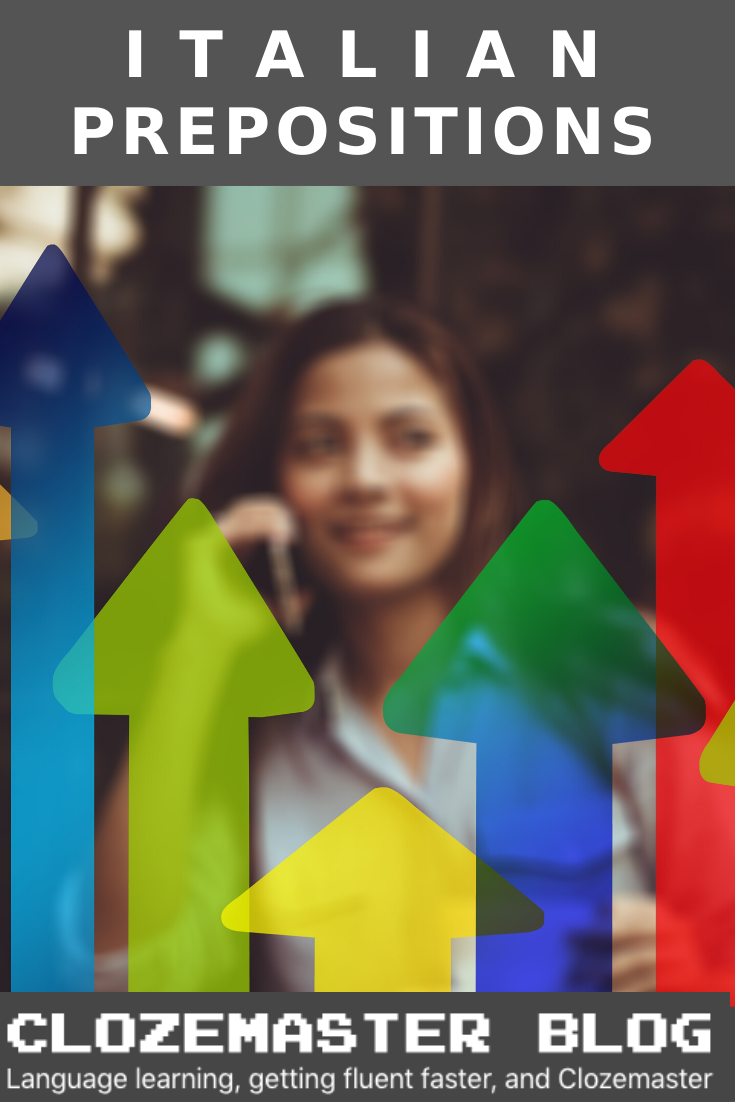 4 thoughts on “Italian Prepositions: What You Need to Know to Use Them Correctly”