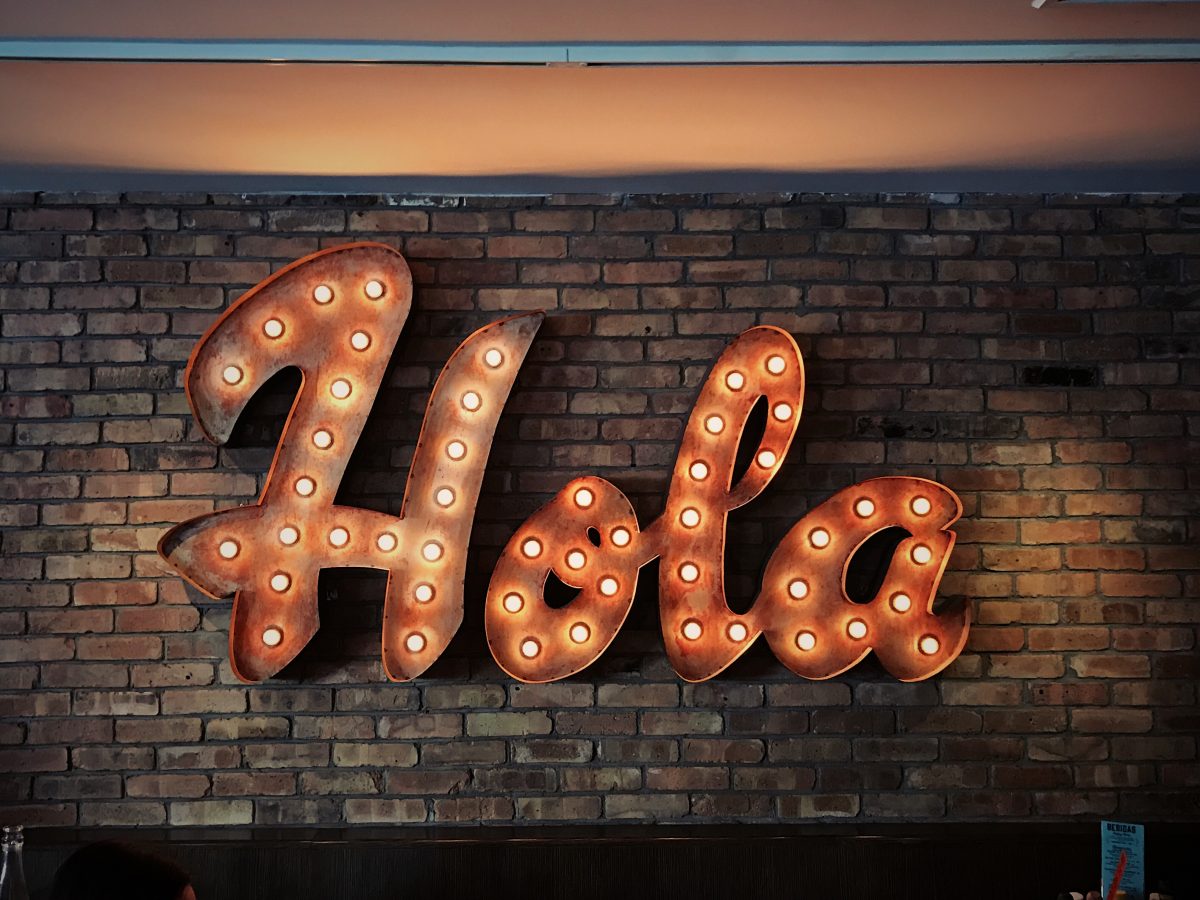 As we’ve seen, saying hello in Spanish is not the greatest of challenges. It’s a little four-letter word that also starts with h: hola. You should remember, however, that, unlike in English, the h in Spanish is silent (unless it’s preceded by the letter c).

You can take a look at how to pronounce hola here; you can listen to different accents, which is a great plus!

You have probably run across this greeting with exclamation marks:

Of course, whether you use them in writing will depend on context, intention, or even your mood. However, we feel this is the perfect time to remind you that, in Spanish, there are two exclamation marks, one at the beginning and another at the end of the word or phrase in question.

So far so good, right? But, as we all know, saying hello in Spanish isn’t enough. There are many different greetings in Spanish depending, for example, on the time of day or the level of formality. So let’s keep this going!

Time of day greetings in Spanish

In the English language, our day is divided into four parts: morning, afternoon, evening and night. Spanish speakers decided to make this a bit simpler and reduce this to three options. So here’s how to say hello in Spanish depending on the time of day.

Although, technically, these phrases literally translate into “good day” and could be used any time the sun is up, they work as the equivalent of saying “good morning” in Spanish.

You can use them to say “good morning” in Spanish until about 2 p.m.

A Spanish afternoon starts at 1 or 2 p.m. and ends whenever the sun goes down. However, if the sun sets quite early, you might still be saying buenas tardes a bit later. Depending on daylight and the region, you could use Buenas tardes until 8 p.m or so.

Unlike in English, here, there is no difference between saying hello or goodbye to someone after dark. Whether you’ve just arrived at a party or are calling it a night, buenas noches is the way to go.

You can take a look at how to pronounce “good morning” in Spanish, as well as other greetings, in this video:

“How are you?” in Spanish

Saying hello in Spanish is not all there is. We often accompany our greetings by asking someone how they are doing. So let’s look at a couple of expressions to do just that.

These are the most common phrases to ask someone how they are doing. The important thing to note here is that these phrases change depending on the level of formality. In English, we use only “you” to refer to the person we are talking to, but in Spanish things get a bit trickier.

There are three different ways to refer to the second-person singular: tú, usted and vos. Tú is used in an informal context (to talk with family and friends) and usted in a formal one (used when at work or talking to your elders, for example). Meanwhile, vos is another informal option, but it is used just in a handful of countries in Latin America, such as Uruguay. If you want more information about Spanish pronouns, have a look at our article on this topic.

The reason why pronouns are so important here is that Spanish conjugation changes for each pronoun. So, now that we’ve cleared up our levels of formality, let’s go back to our phrases, shall we?

If you want to learn more about these two phrases, click here.

We’ve covered our greetings in Spanish but have stayed in the realm of formality and grammatical correctness. It’s time we take a look at more informal phrases and some slang used to say hello in Spanish.

This is quite informal and usually used by the younger crowd as a cutesy way to say hello.

Just like in English, there’s an abbreviated way to say “good morning” in Spanish. Here, Spanish simplifies things again and just uses buenas (literally translated into good) so it actually works at any time of day.

Keep in mind that this one does not work to say goodbye; you should use it only to say hello.

You might use this option if you are calling after someone or if you are surprised to run into them.

This is an informal way to ask someone how they are doing.

Another informal way to ask someone how they are.

Shockingly, this is yet another informal way to say the same thing.

This last phrase is used when catching up with someone to ask them what they have been up to.

There are two options in this one, depending on whether you are using tú (¿Qué cuentas?) or vos (¿Qué contás?).

Let’s put it into practice

We’ve taken a look at the vocabulary in general, but you might want to see this in context. So here are a couple of simple conversations, starting with different ways to say hello in Spanish.

How to greet someone

We’ve covered all the different ways to say hello in Spanish, but it is also important how to greet someone physically when meeting them face to face. Let’s go from most formal to least formal, just like we did with our vocabulary.

One kiss on the cheek

This is the standard informal greeting in Latin America, except for two men, as we’ve mentioned above. However, in some countries like Argentina, men also greet each other with a kiss on the cheek.

One kiss on each cheek

In Spain, people go for two kisses instead of one. One on each cheek!

Finally, when it comes to close friends or family, people may also choose to greet each other with a hug.

Yes, this is an article about saying hello in Spanish. But we couldn’t leave you hanging without teaching you how to say goodbye as well. So here are just a handful of phrases to help you finish the conversation.

This is the most common and easiest way to say goodbye in Spanish. It works both in formal and informal situations.

This word is more colloquial and is used mainly in some Latin American countries, like Peru and Chile.

We use this phrase when we expect to see the person again at some point. It works for both formal and informal contexts.

If you are saying goodbye to someone you will see the next day, this is definitely the way to go.

Final comments on how to say hello in Spanish

There are quite a few ways to say hello in Spanish. We have most likely not covered all of the informal variants that can change from country to country, but we hope to have given you enough to get started.

If you want to keep learning Spanish, be sure to take a look at this article.