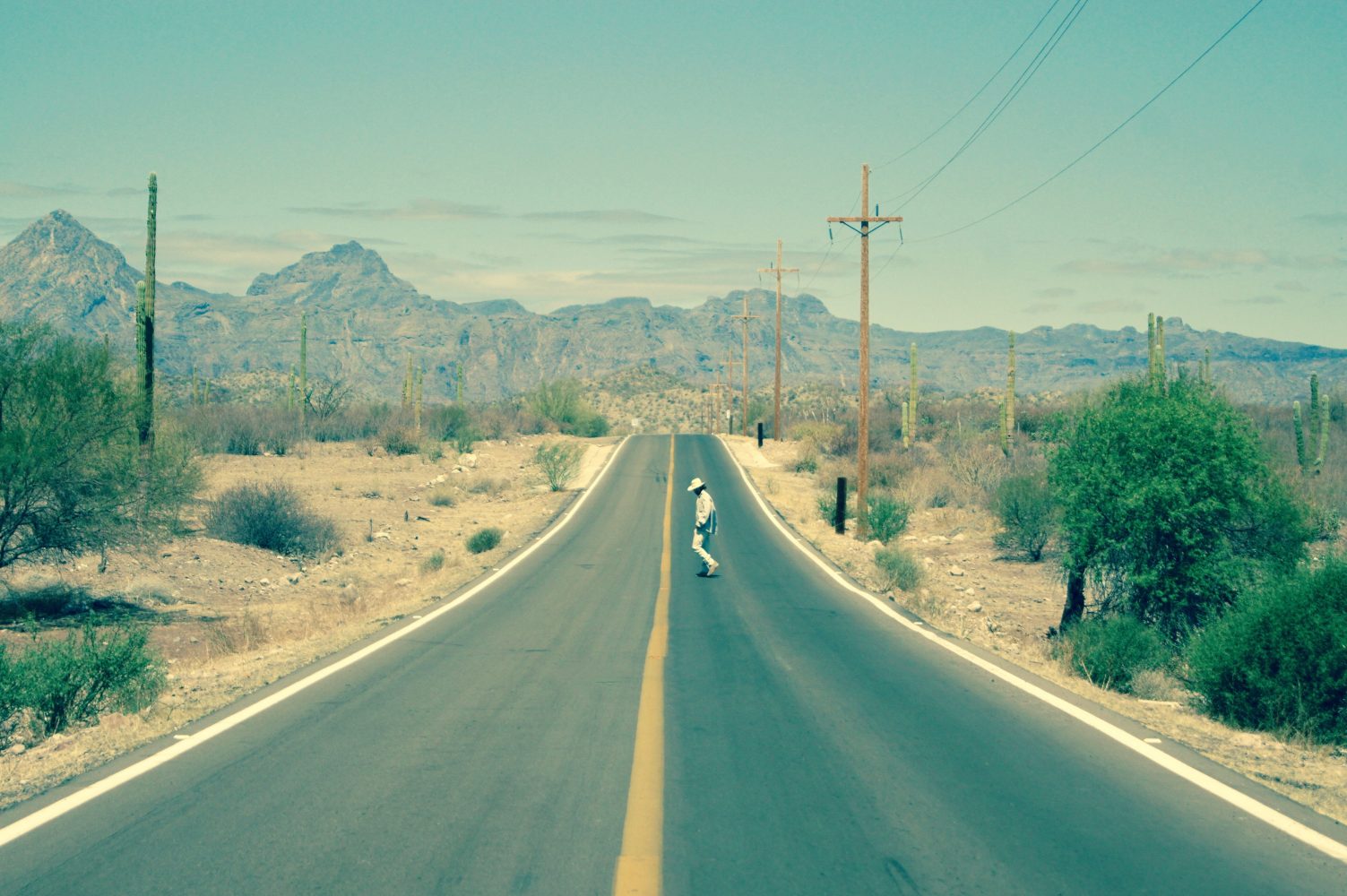 Whether you need to state where you’re going on holiday or ask a friend if they can meet you tomorrow at 6 PM – chances are you’ll want to use the German verb “gehen”.

The German verb “gehen” is used a lot, and it is quite possible that you will find yourself using it often as well.

The verb “gehen” has an irregular conjugation, which means that in certain forms the verb changes its vowels, and in its past participle form the suffix –en is added.

Because of this conjugation pattern, the word “gehen” is also described as a strong verb.

You’ve probably already noticed that in German there is no present progressive tense like in the English language.

In English, the purpose of the present progressive tense is to indicate that you have certain plans for the future, as in I’m going to Chicago tomorrow.

In German, however, whether you have concrete plans or not, there is only “I go” and not “I am going” or “I am going to go”. So the only way to figure out whether a plan is immediate or not is to look at the actual meaning of the sentence (usually hinted at by temporal adverbs such as tomorrow).

Wir gehen in die Oper. – We’re going to the opera.

Gehst du auch in die Theodor-Heuss-Schule? – Are you going to Theodor Heuss High School as well?

Wie geht es dir? – How are you doing?
Es geht, danke. – I’m okay, thanks.
[Es geht is a German expression that basically means that you’re not doing too good, but things are also not extremely bad. Think of a mediocre in-between. This expression can also be shortened to geht so, although this is rather informal.]

Conjugation of the German Verb “Gehen” – Simple Past Tense (Imperfekt)

The simple past tense in German is kind of a special tense. It is used a lot in written and formal language, so you’re likely to encounter it when listening to a speech, reading the newspaper or watching a documentary on TV.

However, in day-to-day language, the simple past tense almost has completely vanished, and is instead replaced by the Perfekt (present perfect), which I’ll give you all the details about after we have a closer look at the Imperfekt.

Now, before we talk about the specifics, let me give you a better idea of how the simple past tense works.

In the simple past tense, the vowel in the middle changes from e to i, and in certain forms (such as in “wir gingen” and “sie gingen”) the suffix –en is added to the verb.

As I mentioned earlier, the simple past tense is mostly used in formal or written language. If you’re in a non-formal situation, using the form “ich ging” will probably earn you some strange looks, as it sounds almost old-fashioned.

Instead, most Germans use the Perfekt (present perfect) and rather opt for using “ich bin gegangen”, which fulfills the role of the simple past tense in everyday and casual/informal language.

But before we move on to the more widely used present perfect, let’s take a look at some examples of the German verb “gehen” in the simple past tense.

Ich ging mit ihr nach Spanien. – I went to Spain with her.

I’ve already briefly talked about the Perfekt in the previous section. When conjugating the German verb “gehen” in the present perfect tense, the verb “sein” is used as a “helping verb”. This might be especially confusing for native English speakers since in English the verb “to have” (rather than “to go”) is commonly used in this case.

Depending on the meaning and context of the sentence, the present perfect tense of the German verb “gehen” can either mean “I went” (ich bin gegangen) or “I have gone”.

Notice also how the verb “gehen” shifts to “gegangen” in the present perfect tense – and also in the past perfect tense, which I am going to explain in the next section.

You will – unfortunately – simply have to memorize the word “gegangen”, as well as remember in which tenses it is used.

The good news is that there are (thankfully) no special forms of the verb “gehen” in the present perfect tense and the past perfect tense. It always stays “gegangen”.

Warum seid ihr ohne mich gegangen? – Why have you guys gone without me?

Conjugation of the German Verb “Gehen” – Past Perfect Tense (Plusquamperfekt)

The past perfect tense is used to describe situations that have happened before another action took place in the past, such as “Ich habe nach dir gesucht, aber du warst schon gegangen” (“I had been looking for you, but you had already gone”).

As you can see from this example, one action (in this case the person leaving) had taken place before the other (you looking for said person).

Since one action has to follow the other to really make sense in a statement, the Plusquamperfekt or present perfect tense is rarely used in a single, independent statement.

Ich hatte nach Tom und Anja gesucht, aber sie waren schon gegangen. – I had been looking for Tom and Anja, but they had already gone.

The future tense is a bit of a rare case in German. While it is sometimes used in formal and written language, in most cases (especially in spoken language) Germans opt for the present tense paired with an adverb instead.

As you can see in the examples below, the helping verb “werden” (to become) is used for building the future tense of the German verb “gehen”. The word “werden” often indicates a passive action taking place.

Werdet ihr dieses Jahr nach Irland gehen? – Will you guys be going to Ireland this year?

Ich fürchte, das wird nicht gehen. – I’m afraid that will not be feasible.

Admittedly, the Futur II is not the easiest of tenses. Upon first seeing it, you might think it is some sort of weird mashup of different tenses – and you might even question its purpose.

The answer is (relatively) simple: the future perfect tense is used to describe the so-called vollendete Zukunft, which roughly means “completed future”.

When using the Futur II, you are describing a situation that will take place in the future, but that is going to already be completed by that time.

Let me give you an example: if you wanted to say “In two years, I will have built a treehouse for my son” in German, you would use the future perfect tense: In zwei Jahren werde ich meinem Sohn ein Baumhaus gebaut haben.

You can also use the Futur II to express an assumption or speculation:

So, let’s take a closer look at the conjugation of the verb “gehen” in the future perfect tense.

Bis dahin werde ich schon nach Frankreich gegangen sein. – By that point, I will already have gone to France.

Du wirst doch nicht dorthin gegangen sein? – You haven’t gone there, have you?

Depending on the situation, commands can be an important part of the German language. While they’re not commonly used, I think they could still give you an interesting insight into the conjugation of the verb “gehen”.

There are only three command forms in the Imperativ – and they’re not even that hard to keep in mind! Let me show you.

While “gehen wir” is a commonly used term, I’d recommend using both other forms of the Imperativ of the verb “gehen” carefully, since they can easily be interpreted as rude.

In order to take some of the edge off, you can add the word “bitte” (please) to make it a little more polite, as in:

The same cannot, however, be done with the expression “Gehen wir!”

This was a lot to process – but fear not!

By using Clozemaster, you can easily test your knowledge and practice the conjugation of the verb “gehen”, from present tense to Futur II!

Test your skills and see what you’ve learned from this article by playing a selection of sentences with forms of the German verb “gehen”. 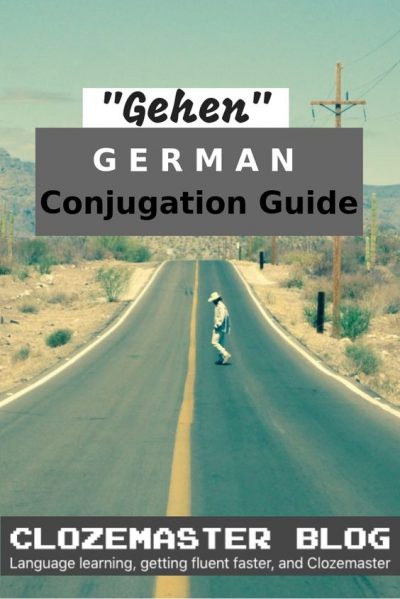