When you first start learning German, you might feel quite upbeat and optimistic, thinking “Ok, this doesn’t look that hard, some of it is quite similar to English, like “Good morning” = “Guten Morgen” or “Monday” = “Montag”, I can do this!”.

And then you come across a little something called ARTICLES (cue dramatic music). Since when are articles a problem? In English, life is easy; if you know what you want, you just use THE, and if you don’t know what you want, you use A/AN. It doesn’t matter if that thing you want is a specific chair, book or apartment. You will, without thinking twice, be able to say

“I want the chair with the fluffy pink unicorns on it.”

“I want the book that the cute guy with the blue shirt is reading.”

“I want the apartment with the stunning rooftop view.”

In English, you would use the same definite article “the” in all three sentences. In German, however, nouns (i.e. chair, book, apartment) have different grammatical genders. What’s this “grammatical gender” thing, you ask?

German nouns have a gender

In German, words that refer to things, i.e. nouns (both tangible, like “chair”, and abstract, like “freedom”) have a gender, either their natural, biological, gender (woman, man, daughter, son, etc.), or their grammatical gender, which means that the thing that the article refers to does not have a natural (biological) gender, but that the language assigned a gender to it nevertheless.

Therefore, in German, the words from the above example also have genders, even though they do not originate from the characteristics of the object, but are assigned somewhat randomly. In German “chair” is masculine (DER Stuhl), “book” is neuter (DAS Buch) and “apartment” is feminine (DIE Wohnung).  The article DIE is also used to for the plural, irrespective of the singular gender, so

Since German is a language that has cases, these articles change according to the grammatical case:

But, as you can see, there are similarities across genders and not all cases require different article forms. For example, the nominative/accusative cases for feminine and plural nouns are the same, and the same goes for the masculine and the neuter dative and genitive.

If you’re a German beginner, this table might seem quite daunting. But, apart from grouping the article forms according to their similarity, there is one other thing you can do to make your life easier – DROP THE GENITIVE CASE. That’s right; I just said you should ignore a whole case.

Ignore the genitive if you’re just starting out

Why? Because pretty soon the genitive case will no longer be with us. It will be pushing up the daisies and joining the choir invisible, like in the Monty Python’s Flying Circus “Dead Parrot” sketch.

There’s even a highly amusing book devoted to this topic, written by Bastian Sick and entitled “The Dative is to the Genitive its Death” (“Der Dativ ist dem Genitiv sein Tod”), which you should definitely have a look at once you can read books in German.  What this title essentially means is that even native German speakers often use the dative instead of the genitive case and that pretty soon the genitive will cease to be used. Even now, the genitive is something you learn in German language courses only when you reach level B1 (intermediate user), or thereabouts. To sum up, you can have a pretty decent and grammatically correct conversation in German without ever using the genitive case.

When to use which article, der, die, or das?

After we have grouped our articles together according to their declension like in the table above and eliminated the genitive, life seems a bit easier. However, there is still the huge elephant in the room – how will you know when to use which article; DER, DIE or DAS?

For nouns that have a biological gender, this is easy.

Occupations have both masculine and feminine forms. The feminine form is generally derived from the masculine by adding the ending “-in”, for example:

Some exceptions from the rule of “biological” gender are:

Yes, you read that correctly – “the girl” in German is grammatically not feminine, but neuter (das Mädchen). You will find the reasoning behind this seemingly senseless and illogical feature of the German language in the following section.

Nouns with a grammatical gender

Unfortunately, the majority of nouns in German do not have a naturally occurring biological gender. But this doesn’t mean that you have to curl up in a ball in the corner of the room and cry. You do not have to learn ALL the genders of ALL the nouns by heart – there are shortcuts.

You can use the noun endings (also called suffixes) to solve approximately 50% of your article and noun gender-related problems. Simply learn which noun endings indicate which gender and you will know which article to use. That easy!

The following table shows some of the suffixes that indicate a specific gender. 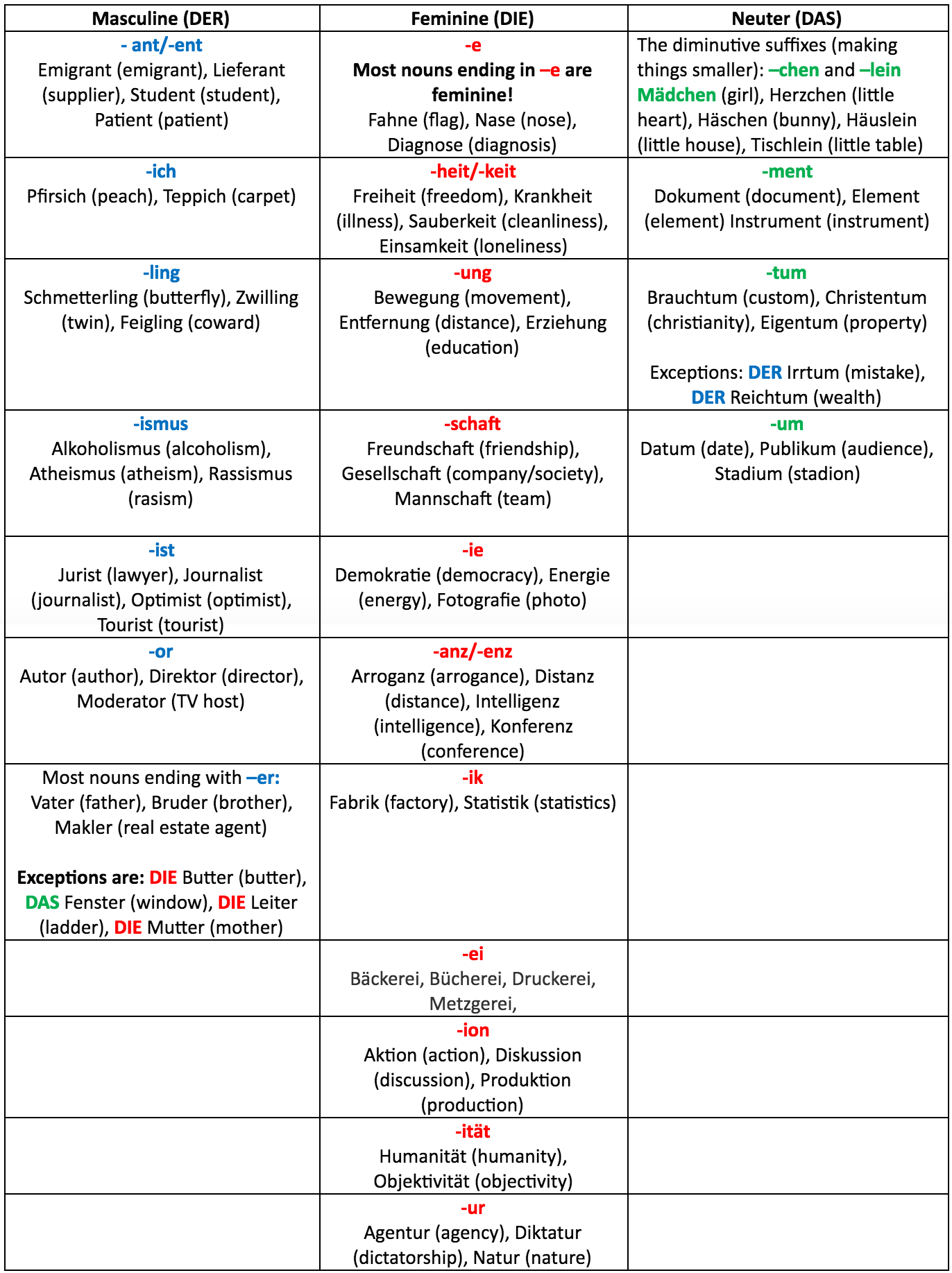 Although this table is not exhaustive or to be taken as 100% correct all of the time, it will work for you 9 out of 10 times for basically half the nouns in the German language. In my book, that’s worth a lot! So the next time you see a new word and it ends in, for example, –ung, -schaft, or –heit/-keit you already know that it’s gender is feminine. Or if something ends in –lein or –chen you know it’s a diminutive and therefore a neuter. Pretty cool, right?

Gender according to certain categories of meaning

One last shortcut to help you with your noun genders and articles is to learn certain categories of meaning that are always the same gender, such as the following.

So, to sum up, here is your ultimate survival kit for German articles/noun genders in one place:

And last, but not least:

Ideally, at this point you would also learn its plural form (since it is often irregular), like this:

Finally, as someone who has been speaking German all their life and teaching it for 10 years, I would like to offer the following little nugget of wisdom with regard to German articles – don’t worry about them too much. It’s ok to learn their declension, the noun suffixes, etc., I stand by all of the advice I have given in this article. But even if you work really, really hard, study all the cases and endings, always write down the article when learning a new word, you will inevitably make mistakes. Learning a language is all about making mistakes. In fact, I would dare say that it’s much more important to make lots and lots of mistakes, have someone correct you and then learn from these mistakes, than to try to avoid them by not speaking at all. What’s important is to embrace this aspect of language learning and to not get frustrated about making the same mistake a million times.

What’s the best way to learn definite articles in German?

The best you can do to improve your language skills is take the German you know now, at this very moment, and go out into the world (or some online language learning community, for example) and USE IT. It won’t be perfect, it will be chaotic and messy, everything you thought you knew will just disappear and you will find yourself sounding like a complete beginner. And that’s perfectly ok! What’s most important when using a new language is simply being able to establish communication with another person. If you can’t communicate in a language, then you don’t really speak it, do you? And using the wrong article will generally not interfere with your communication or the message you are trying to convey. So, if I were somewhere in Germany, going for a leisurely walk in a historic town, and heard someone scream out

I wouldn’t go into walk up to this person and say “Entschuldigung, meinten Sie nicht DAS Mädchen?” – “Excuse me, I believe you meant DAS Mädchen?” (although I might bring this up once the crisis was resolved ☺). No, I would go and try to help this person. It didn’t matter that they used the feminine article instead of the neuter, I could still understand what they were trying to say. That’s what I always emphasize with my students, that they shouldn’t make a fuss when they accidentally used the wrong article because I was still able to understand perfectly well what they were trying to say. And as long as I can do that, they are doing awesome.

Exposure and practice are key

Like with anything in life, learning articles takes a lot of patience and time. There are no quick fixes and it will not come to you overnight, but gradually and with experience. The more you expose yourself to the German language, the easier it will be for you. The best thing you can do is to immerse yourself as much as possible in the German language and culture – to listen to lots of German music, watch German TV shows (there are lots of options for free online) and just try to use it as often as you can. Clozemaster is great for this type of immersion. Whether you play the Grammar Challenge or just the Fast Track, you’ll get plenty of exposure to how German definite articles are used in context. The most successful language learners know that learning to speak a language isn’t about memorizing lots of tables by heart, but about having fun with it. So go out there, have some fun with German, and definite articles will follow suit.

Check out the German definite articles Grammar Challenge on Clozemaster – practice choosing and declining the correct definite article for thousands sentences in German!