The English language, with its modest origins on a rainy island in the North Atlantic, has always punched above its weight. The English language was the British Empire’s most successful export. Its adoption as the first language in the United States played a major role in rise to prominence. With the advent of the internet, the language has gained the status of international lingua franca. Now that English has become a linguistic monolith, you might consider whether it is worth it to learn another language. This article argues that there are benefits to learning a language which go beyond simply acquiring a new communication system. This article delineates the social benefits of learning a language. It argues that the acquisition of another language is a valuable and even noble pursuit.

A window to another culture

Meaningful interaction with people from other cultures increases dramatically with the acquisition of a second language. In any interaction, showing respect to your interlocutors is good practice, whether it is a high stakes business negotiation or a relaxed conversation in a bar. Cultural awareness, an ability to demonstrate an understanding of your counterpart’s culture and history, is enormously valuable. With an ability to speak to someone in their own language, you demonstrate a profound respect for that culture.

Someone who has dedicated a significant amount of time engaged with a particular culture, to the degree that they have acquired the language and have achieved high a degree of cultural awareness, can effectively assume the status of compatriot. A delegation which can interact in the local language might be considered more trustworthy than someone who requires the help of an interpreter. This level of respect for another culture is tremendously beneficial in international relations.

Through learning another language, you take a walk in another person’s shoes. You learn that other people may not see the world in exactly the same way that you do. In exposing yourself to the way other people think, you can learn a lot more about yourself. You gain a new understanding of the power of language. You begin to be more careful about how you use it. Through negotiating this new world, you become a better communicator, more attuned to the thoughts and needs of others. Greater empathy is a worthwhile social benefit which results from language acquisition.

Improve your linguistic expression, in your native language

When learning another language, we can improve our linguistic expression in our native language. It is only while learning a new language that some people come to understand the grammatical complexity of their own language. For example, a native English speaker who is learning French will learn that French does not distinguish between ‘I have gone’ and ‘I went’. He or she may not have realized this subtle difference in their own language until their encounter with a language that does not have it. This will inform the way in which they use language and will encourage more precise use of expression in future.

The Norman French exerted an enormous influence in Britain and Ireland in the centuries after their conquest of the islands in the 11th century. This led to an enormous influx of French terms into the English language. This history is apparent in the modern-day usage of English, which might be considered to resemble French more closely than German or Dutch, with which it is nominally more closely related. An English learner of French might be surprised to that a significant proportion of the vocabulary is already familiar. Encounters with a foreign language inform us about the complex historical relationships which influenced our daily speech.

Similarly, learners of another language very quickly come to understand that there are grammatical forms and expressions which appear strange. For example, English speakers often have difficulties with the honorifics systems which exist in many languages. In many languages the word for ‘you’ has two forms, one for close friends and family, and another for strangers and figures of authority. While it is difficult to attribute cultural features to a community based on their language, an understanding of these subtleties can lead to a clearer understanding of the culture.  The distinction between forms of ‘you’ might explain rigid divisions you have observed between managers and workers in a factory, for example. A knowledge of these features can inform your interactions with different cultures.

The ability to speak one language can make it easier for you to learn other related languages. Someone who knows German will understand a significant proportion of Dutch vocabulary, for example. A Spanish speaker will be able to pick up Italian more easily than someone without any knowledge of the language. By interacting with one culture, you can open doors to further cultures. Through learning another language, you potentially expand your horizons exponentially. This is enormously beneficial, whatever line of work you happen to be in.

By learning a language, you validate your status as a citizen of the world. You make a contribution to international cooperation and understanding. In the modern era, where many seem increasingly to pride themselves on their isolation from other cultures, any effort, however small, to forward the cause of international friendship is worthwhile. 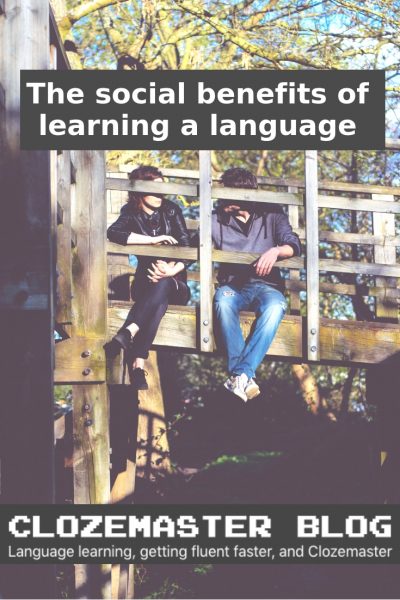