Polish imperative verbs are special verb forms whose purpose is issuing commands, giving advice, making requests and many others.

In English, you would usually use the infinitive verb form, as in “Clean your room.” Alternatively, the verb “to let” is used to make imperative-like suggestions, usually as “let’s”: “Let’s go for a walk.”

In Polish, you have to exert a bit more effort to arrive at the correct imperative form. This guide will teach you all you need to know.

Before we move on to the imperative mood, you should first know that nearly all Polish verbs belong to one of two classes: perfective or imperfective. These are known as grammatical aspects.

The most basic imperative forms are the second person singular ones. As the name would suggest, their purpose is issuing commands to a single person.

The second person singular form is also the basis for imperatives in some other persons. Because of this, you should learn how to use it before moving on to other imperative forms.

The way you arrive at the second person singular form depends on the verb. For this purpose, it is possible to break up Polish verbs into three groups:

You just take the base form, cut away the ending, and there you are: the remaining part is your verb in the imperative mood. Well, sometimes you might have to make some adjustments, but more on that in a minute.

For perfective verbs in this group, the procedure is pretty much the same, except this time the source of the stem is the third person singular form in the future tense (perfective verbs don’t have present tense forms):

However, you must note that the last two verbs in both tables require some additional changes.

In (za)płacić, the final c in the stem changes into soft ć in the imperative verb*. You can expect to see this kind of shift quite often, also as ni → ń, si → ś, and zi → ź.

In (z)robić, the o changes into ó. This is also a relatively common shift in imperative forms.

Another large group consists of verbs whose stem in the third person singular ends in the vowel a. In these verbs, the imperative form is created by adding -j to the stem, so that the final form ends with -aj.

Once again, the source of the third person singular verb stem depends on the verb’s aspect. For imperfective verbs, the stem is taken from the present tense form, for perfective verbs – from the future tense form.

The third group is by far the smallest one, as it contains rare exceptions to the above rules. The table below presents a selection of the most common ones: 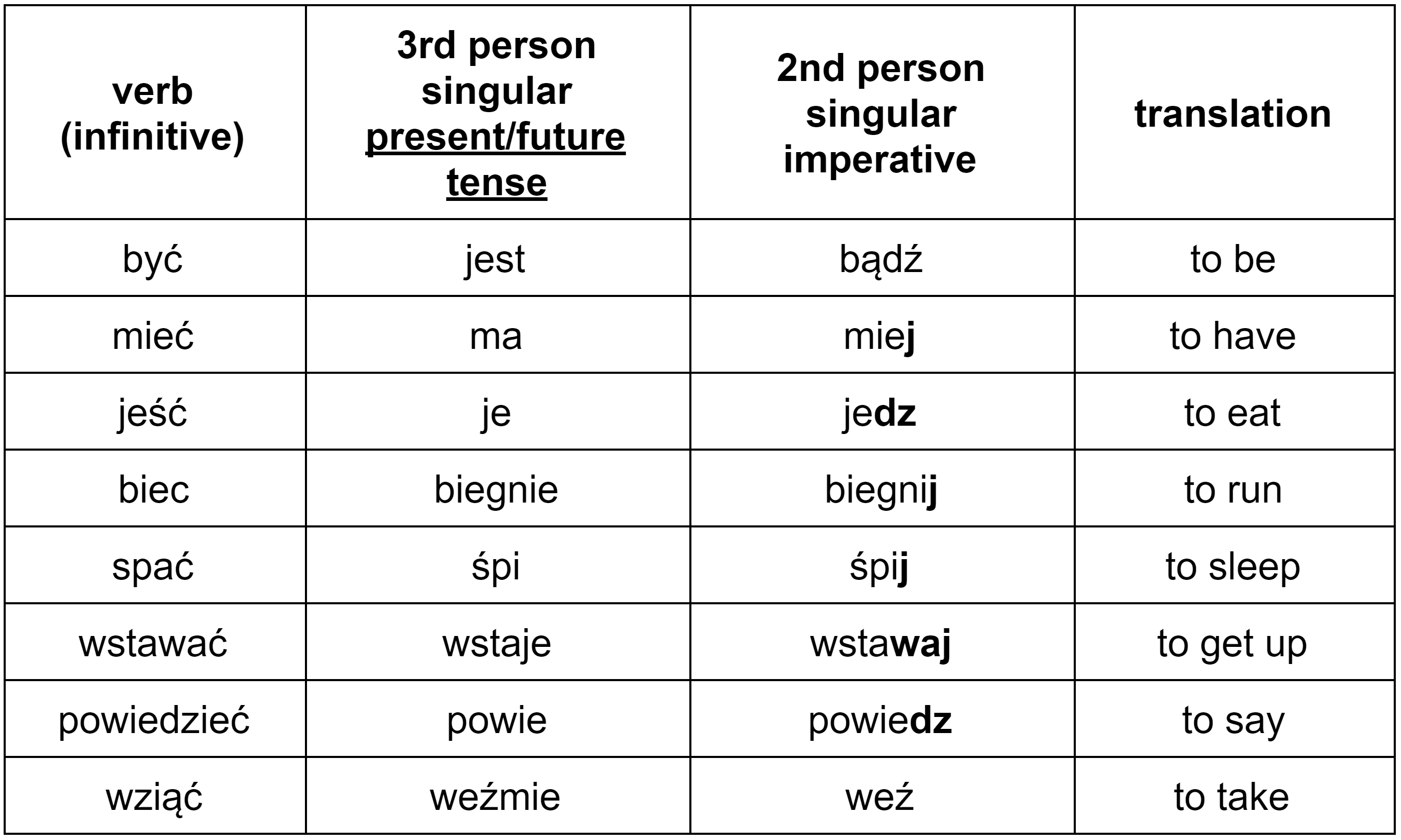 First are the verbs być, mieć, and jeść, whose imperative forms noticeably differ from their third person singular forms. This shouldn’t be very surprising, as the three verbs tend to conjugate very irregularly.

Then, there are the verbs biec and spać. Even though their third person singular stems don’t end in a, they take an additional -j in the imperative, which results in a soft -ij ending.

The verb wstawać has the imperative form wstawaj, which is derived from the infinitive, rather than the third person singular form wstaje.

A similar thing can be said about the perfective verb powiedzieć, whose imperative form powiedz derives from the infinitive, and not the third person singular form powie. The same will be true for other verbs with the root wiedzieć, such as odpowiedzieć (“to answer”) or dowiedzieć się (“to find out”).

Finally, the imperative of the perfective verb wziąć is weź, and not weźm as the third person singular form might suggest.

Once you know how to form imperative verbs in the second person singular, it is extremely easy to arrive at the plural variant. All you have to do is add the suffix -cie to the singular form. There really isn’t any catch to this.

Note that, unlike in some other languages, the second person plural form cannot be used as the polite variant of the imperative when addressing a single person. For that purpose, you have to use a third person structure with a formal pronoun. But more on that later.

The first person plural imperative is for addressing groups to which we ourselves belong. In other words, you use it to issue commands/requests/suggestions that the entire group (yourself included) is supposed to follow. This more or less corresponds to how “let’s” works in English.

Forming imperatives in the first person plural is very simple: just add the suffix –my to the second person singular form.

Now that we’ve reviewed the most common imperative forms, let’s say a few words about how they’re used in context. We’ll mainly focus on how the intent behind the command affects the choice of the verb aspect.

The general guidelines outlined below will apply to imperative verbs in all persons, including forms we’ll only discuss later.

When issuing positive commands (“do this”), we can use both perfective and imperfective verbs. It all depends on the context.

If the request is meant to emphasize that we expect the action to be brought to an end (completed), we typically use perfective verbs (like przeczytaj).

On the other hand, if the command is supposed to get the other person to just start doing something, without any expactation of a specific end result, it should contain an imperfective verb (like czytaj).

So a parent might address their child by using a perfective verb:

In this case, the emphasis is on actually finishing the book – perhaps reading the whole thing is a part of a school assignment that is due soon.

Here, the emphasis is on the action itself: the child is made to sit down and read the book for some time. The command doesn’t make it clear whether the parent actually expects the child to finish the book anytime soon.

Thus, when asking someone not to do something, it usually doesn’t matter if you want to prohibit them from doing the action altogether, or just from bringing it to completion. In both cases, you’ll probably want to use the imperfective aspect:

However, there are still some contexts where the perfective aspect will be more appropriate in negative commands. It is rather difficult to point to them all, but they mostly involve warning somebody against doing something careless or impulsive:

Imperative verbs in the third person are a bit weird. They’re commands requesting some third party to do (or not to do) something… yet the third party is rarely there to hear the command.

It might be difficult for an English speaker to intuitively grasp this concept. As you’ll see in a minute, English doesn’t really have a single common expression that would account for all the various uses of the Polish imperative mood in the third person.

The Polish imperative forms in the third person are created differently to the first and second person forms. Instead of adding an imperative-specific ending to the verb, they rely on a separate word that is placed before the verb.

In third person singular, the present/future tense verb following niech must also be in its singular form:

Here are some more examples – note how the English translation changes depending on the context:

Niech to będzie nasz mały sekret. (“Let it be our little secret.”)

Niech Moc będzie z tobą. (“May the Force be with you.”)

Here are some other examples with third person infinitives in the plural:

Niech pomogą ci rodzice. (~ “Ask your parents to help you.”)

As you probably know, third person verb forms in Polish double as formal/polite forms of address when used together with formal pronouns such as pan, pani, or państwo.

This is also true of the imperative mood: if you want to issue a polite command or request to a stranger, superior or a casual acquaintance, one way to do this is to use the third person imperative (niech + verb) combined with a formal pronoun.

The formal pronoun is typically placed between niech and the verb.

It’s best to illustrate this with some examples:

One more way of issuing polite commands is combining the word proszę (“please”) with the infinitive form of the verb. While it can’t really be classified as the imperative mood, it is used in a very similar way.

A request employing the word proszę is usually considered to be even more formal than the third person imperative with a formal pronoun. It is the most impersonal of all direct commands, as it doesn’t really point to a specific addressee. This is also why it is often used in public communications.

Below are a few examples:

You’ve studied all the basic rules governing Polish imperative verbs. Hopefully, you now feel more confident in your ability to use them correctly. But do you really have what it takes to take up the Imperative Verbs Grammar Challenge?

1 thought on “The Complete Guide to Polish Imperative Verbs”