From greetings to transportation to shopping, there are many common Swedish phrases and expressions that are used in the course of an average day. Learning them can help you blend in with the natives in everyday situations.

Read and practice these common Swedish phrases, and then follow Sven-Olof through his day to see if you have learned how to use them. 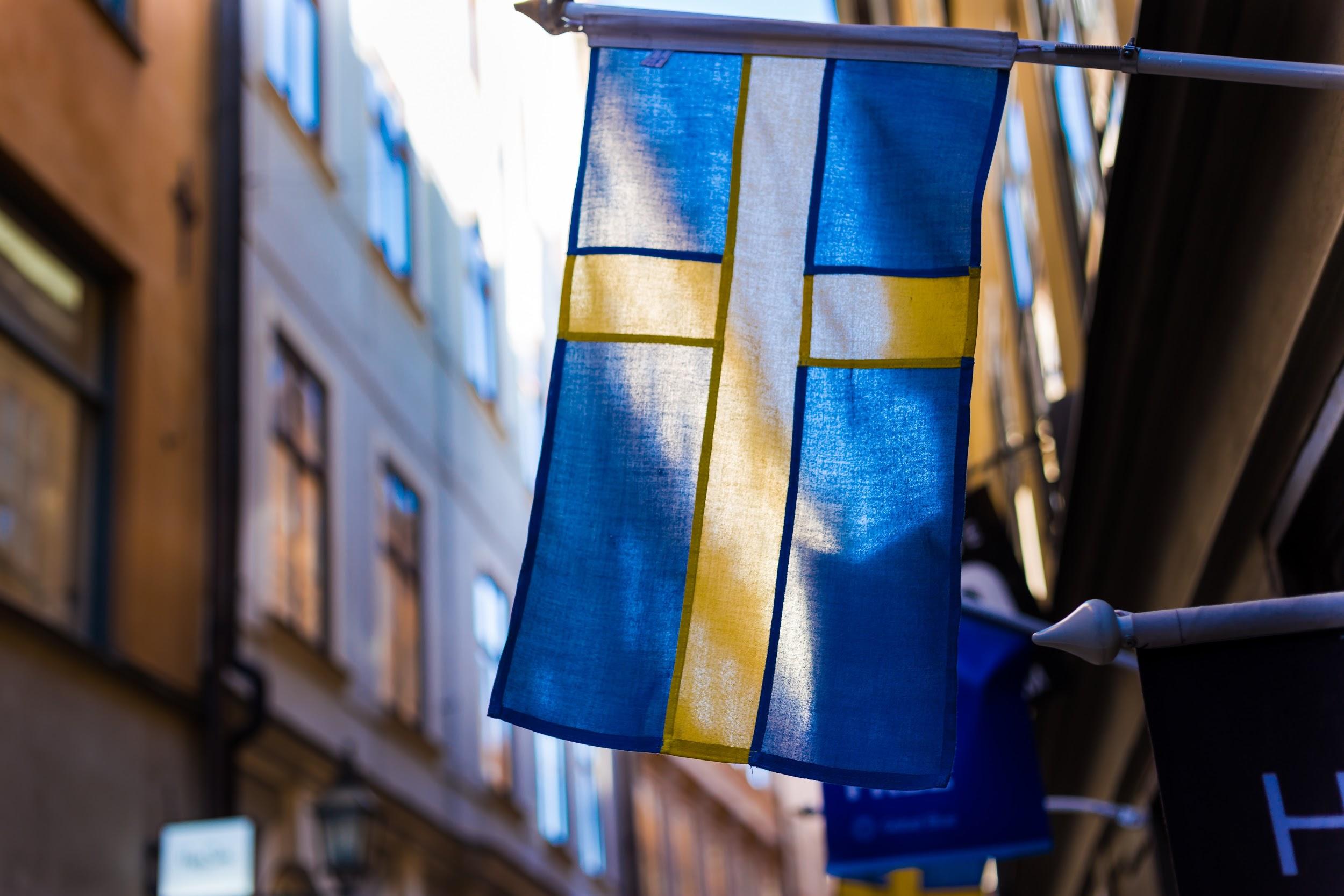 The formal Swedish “Hello” is simply Hej!, which can sometimes be confusing because it sounds just like the informal English “Hey!” Saying it twice: Hej, hej! makes it more informal, though this greeting is often used as a form of “Goodbye” as well.

God means good, so these are the “good greetings”: Good morning, Good day, Good evening, Good night. These can be both formal or informal depending on the tone.

The d at the end of god is rarely pronounced, so these words become like contractions when spoken: Go’morron, Go’dag, Go’kväll, Go’natt. Notice that the g in morgon is also not pronounced.

The formal Swedish for goodbye is Hej då. It rhymes with play-dough. You can also say “See you later!” or “Talk to you later!”: Vi ses! Vi hörs!

Before saying goodbye, a Swede would wish you well. Ha det bra! literally means “have it good” but would be used similarly to “Have a nice day!”

Hej! Jag heter Christine. Vad heter du? “Hello! My name is Christine. What is your name?” Introducing yourself in Swedish is very similar to an English introduction. You would most often extend your hand for a handshake.

The polite response is Trevligt att träffas – “It’s nice to meet you.” This can also be shortened to the single word Trevligt, which is equally polite. 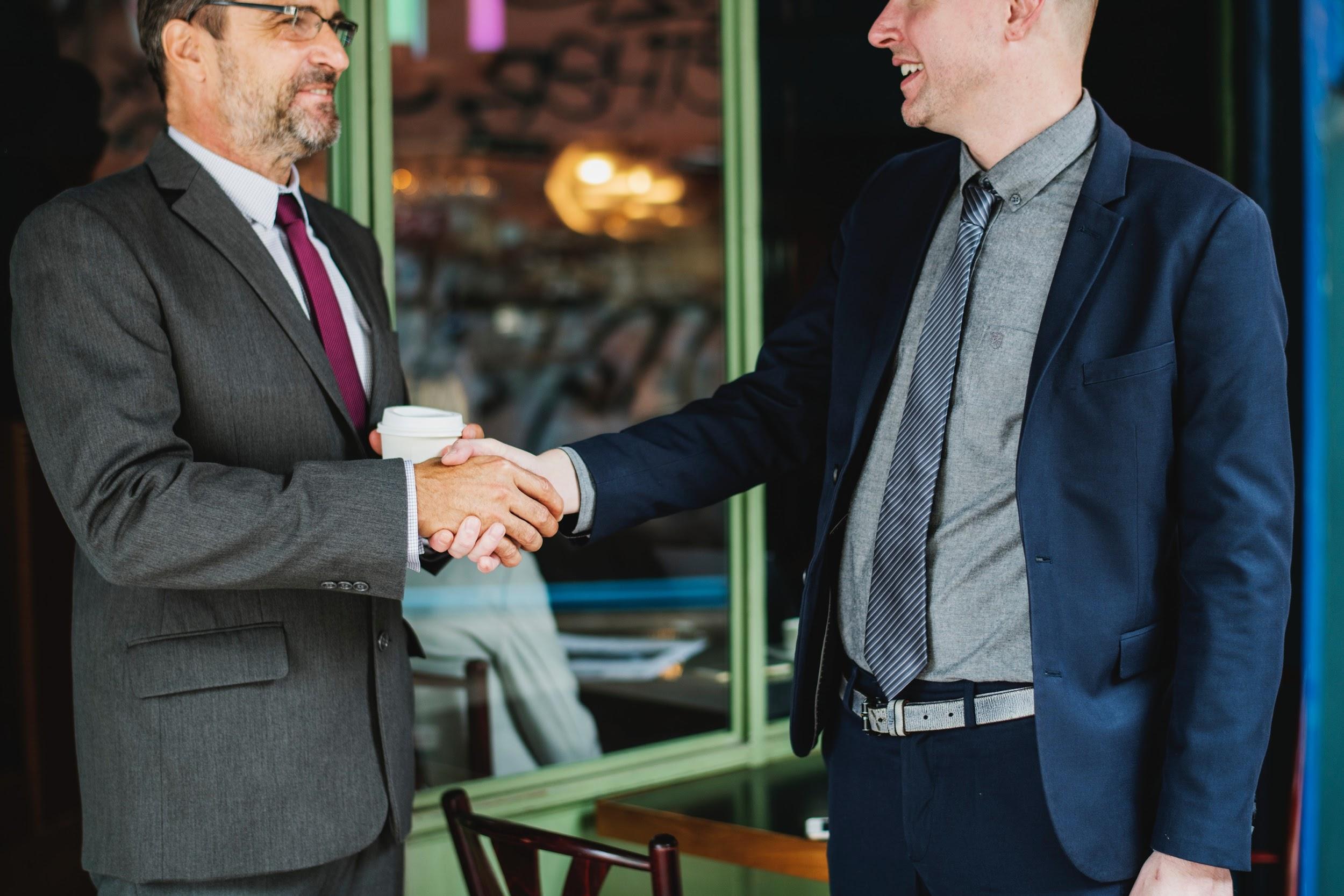 The phrase books will all list the phrase Hur mår du? as the way to ask “How are you?” This is correct in formal situations. However, in common language practice, this Swedish phrase (which literally means “How do you feel?”) is rarely used unless asking someone who was known to have been sick or feeling poorly. It carries the connotations of “Are you feeling better?”

It is much more common to hear the Swedish phrases Hur är det? (“How is it?”) or Hur är det med dig? (“How is it with you?”). In very informal situations, another common question is Läget? – an abbreviation of the phrase Hur är läget?, which means something like “What’s up?”

Swedish manners are a little different than English speakers are used to. While there are polite ways of asking or requesting (such as Var god, snälla, or om du är snäll), there is no direct translation for the word “please”. The word for “thank you” – tack – can sometimes double as a way to say please.

In response to being thanked, most people will answer Varsågod or Det var så lite – “It was nothing”. It is also polite to say “Excuse me” (Ursäkta) in the same ways it is used in English.

When you enter a shop, you may be greeted and welcomed. They may also ask Vill du ha hjälp? or Behöver du hjälp med någonting? to ask if you would like help. If you would like help, say Ja, tack or “Yes, please.” If not, you can answer Nej, tack. Jag tittar bara. (“No thanks, I’m just looking.”) You can tell the clerk what you are looking for using the phrase: Jag vill köpa… (I want to buy…)

Prices are usually well-marked and already include sales tax. If you have questions about the price of something, you can ask Hur mycket kostar det här? Items marked REA! or Extrapris! are on sale for a reduced price (sänkt pris).

When it’s time to pay, you go to the cashier – kassan – to check out. Paying with cash (kontanter) is increasingly uncommon as Sweden aims to become a cash-free society. If possible, be prepared to pay with a card (kort).

The cashier will probably ask Är det bra så?, which means, “Is this everything?” A simple Ja is a sufficient answer, unless you want to purchase something kept behind the counter, in which case you would say, Nej and ask for the item. Most stores do not provide free shopping bags (kasse), so bring your own bag or prepare to pay extra for one.

In the grocery store – I mataffären

A few special circumstances arise in the grocery store. To get a shopping cart (kundvagn) you may need a 10kr or 5kr coin to insert as a deposit (pant). This system, once universal in Sweden, is beginning to disappear as coins become increasingly uncommon, but there are many places where it still applies, so it is smart to be prepared. 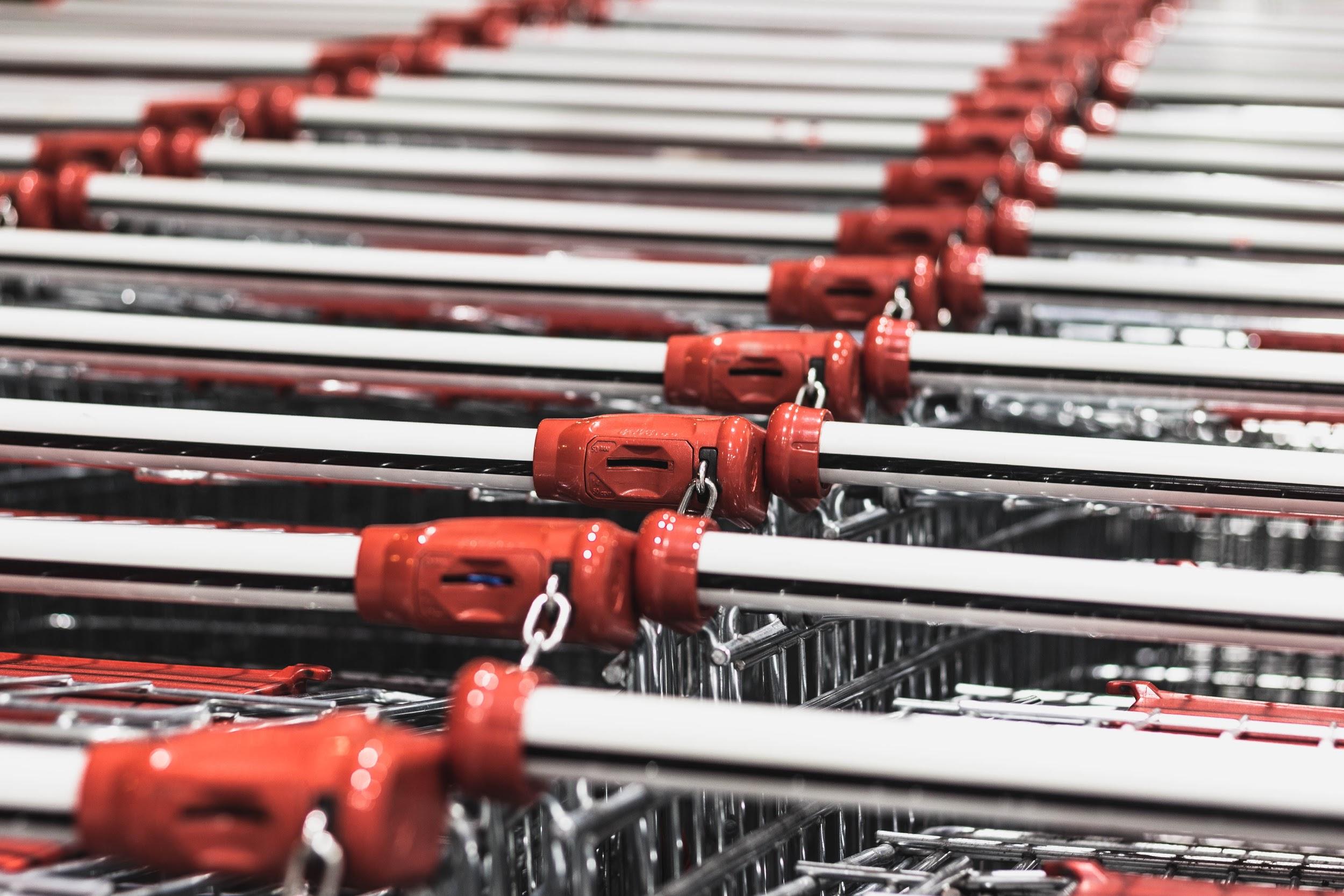 Speaking of deposits (pant), expect a deposit to be added to beverages that come in aluminum cans or plastic/glass bottles. This money is returned when the empty container is returned for recycling, and most grocery stores offer a return area (returstation).

Alcoholic beverages may not be sold in grocery stores in Sweden, so to find these items, ask for directions to the closest Systembolaget, the state-run liquor store.

When shopping for clothes, it might be helpful to ask if you can try something on: Får jag prova den här? If the fitting rooms (provrum) are clearly marked, it is not necessary to ask permission.

If you are concerned about needing to return something, ask the cashier about their return policy: Är det öppet köp på det här? It is common to be able to return an item within 30 days (dagar). 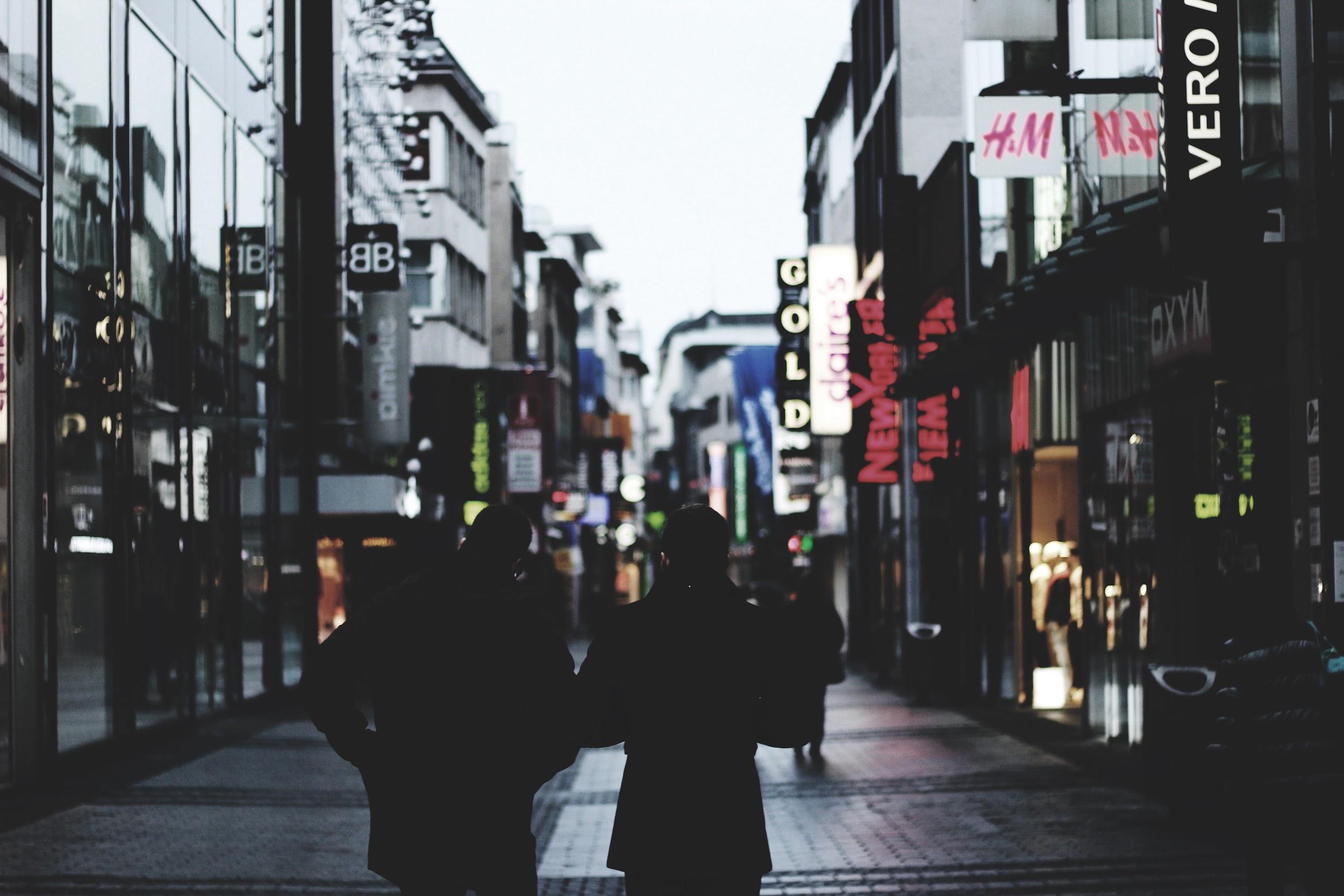 Most places in Sweden have excellent public transportation (kollektivtrafik),which is widely used. It is generally easy to navigate the public transit system, and even though most transportation information is also posted in English, a few key Swedish phrases could be helpful in your journey.

A station is a station, which is spelled the same as in English but pronounced differently. It is usually a compound word with the type of station it is. A busstation is where you find a bus, and a tågstation is where you find a train (tåg). You may also see signs for Centralstationen (central station). English speakers often react when they encounter the word slutstation, which is nothing more than the last stop on the line.

A bus stop is called a hållplats and they are typically named for the streets they are on or the crossroads they are near. Very few buses or trains allow passengers to pay cash on board. Be sure to purchase your ticket (biljett) ahead of time. Transit cards are available in stations and some convenience stores. Tickets can often be purchased on a mobile phone via text message (SMS).

Bus and train schedules (tidtabeller) are usually reliable, but if you are unsure you can always ask När går bussen/tåget? (“When does the bus/train leave?”). For help to get to a specific destination, ask Hur tar jag mig till…

In addition to buses and trains, Sweden’s largest cities also offer subway (tunnelbana), trolley (spårvagn), and boat (båt) connections as a part of the public transit system. When riding the train, you will need to know which track (spår) your train departs from.

You can also choose to get a taxi, which is the same word in Swedish as in English. If you have a driver’s license (körkort) you can get a rental car (hyrbil), but to get around in cities, renting a bike (cykel) is an even better option. 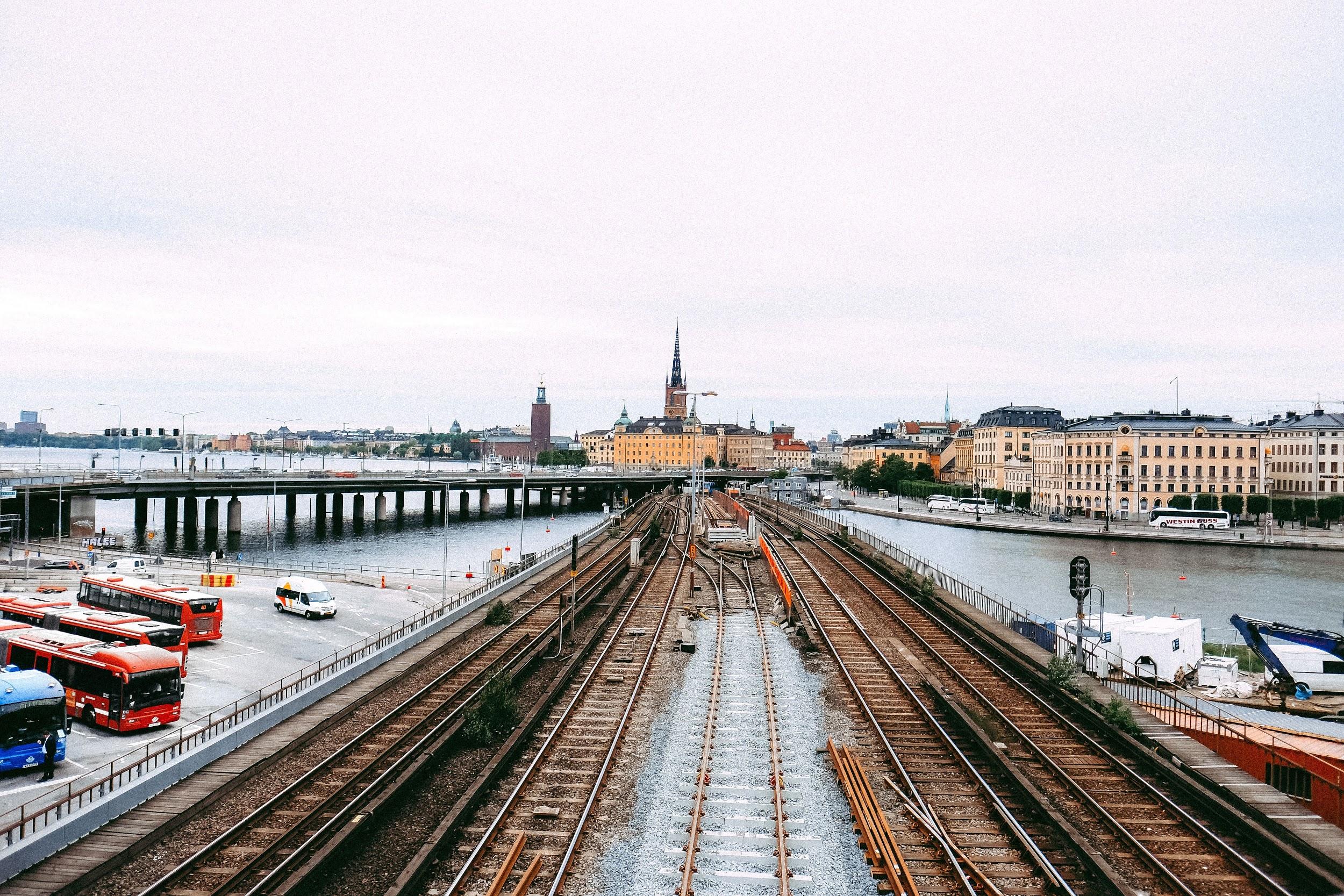 English speakers can rely on using English in Swedish airports, but if you are learning the language, the airport can be a great place to test your skills.

After checking in and dropping off your luggage (bagage), take your carry-on item (handbagage) and find your flight (flyg) on the board. Find a board with departures (avgångar), not arrivals (ankomster), to find out which terminal (terminal) and gate (utgång) to go to. Be sure to leave enough time to go through the security check (säkerhetskontroll). Continue to monitor the boards to know when your flight is boarding (ombordstigning) or if it has been delayed (försenat) or canceled (inställt).

If you need help finding your way, understanding a few directional phrases will help you get where you need to go. Use the phrases Var ligger… or Var finns… to ask where something is. You may need to go straight ahead (rakt fram) or turn left or right (sväng vänster, sväng höger). Your directions may include a landmark to go past (gå förbi) or an intersection (korsning) to watch for.

Sven-Olof gets up and joins his wife Marie at the kitchen table before leaving for work.

At the bus stop he sees his friend Lars.

The bus eventually comes and Sven-Olof rides to work. He works in a small store downtown.

At work (in the store)

The store is busy today. Sven-Olof is helping a customer (kund) to buy a t-shirt.

Sven-Olof walks to the grocery store after work to buy a few ingredients for dinner, then takes the bus home. At the bus stop he is approached by a tourist who sees his grocery bags.

At home, Sven-Olof and Marie eat a simple dinner and watch their favorite TV show På Spåret before heading for bed.

Test your skills and see what you’ve learned from this article by playing a selection of sentences with common Swedish phrases:

Sign up here to save your progress and start getting fluent with thousands of Swedish sentences at Clozemaster.

Clozemaster has been designed to help you learn the language in context by filling in the gaps in authentic sentences. With features such as Grammar Challenges, Cloze-Listening, and Cloze-Reading, the app will let you emphasize all the competencies necessary to become fluent in Swedish.

Take your Swedish to the next level. Click here to start practicing with real Swedish sentences! 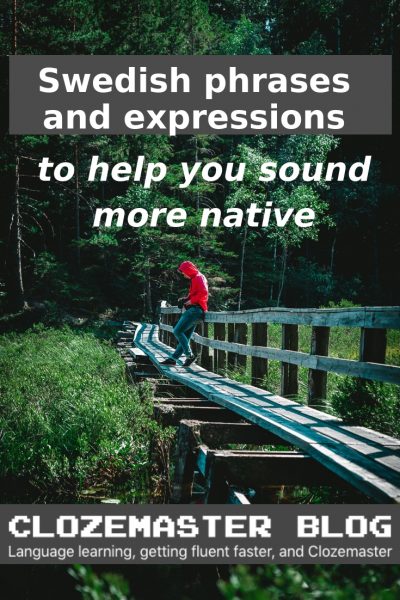