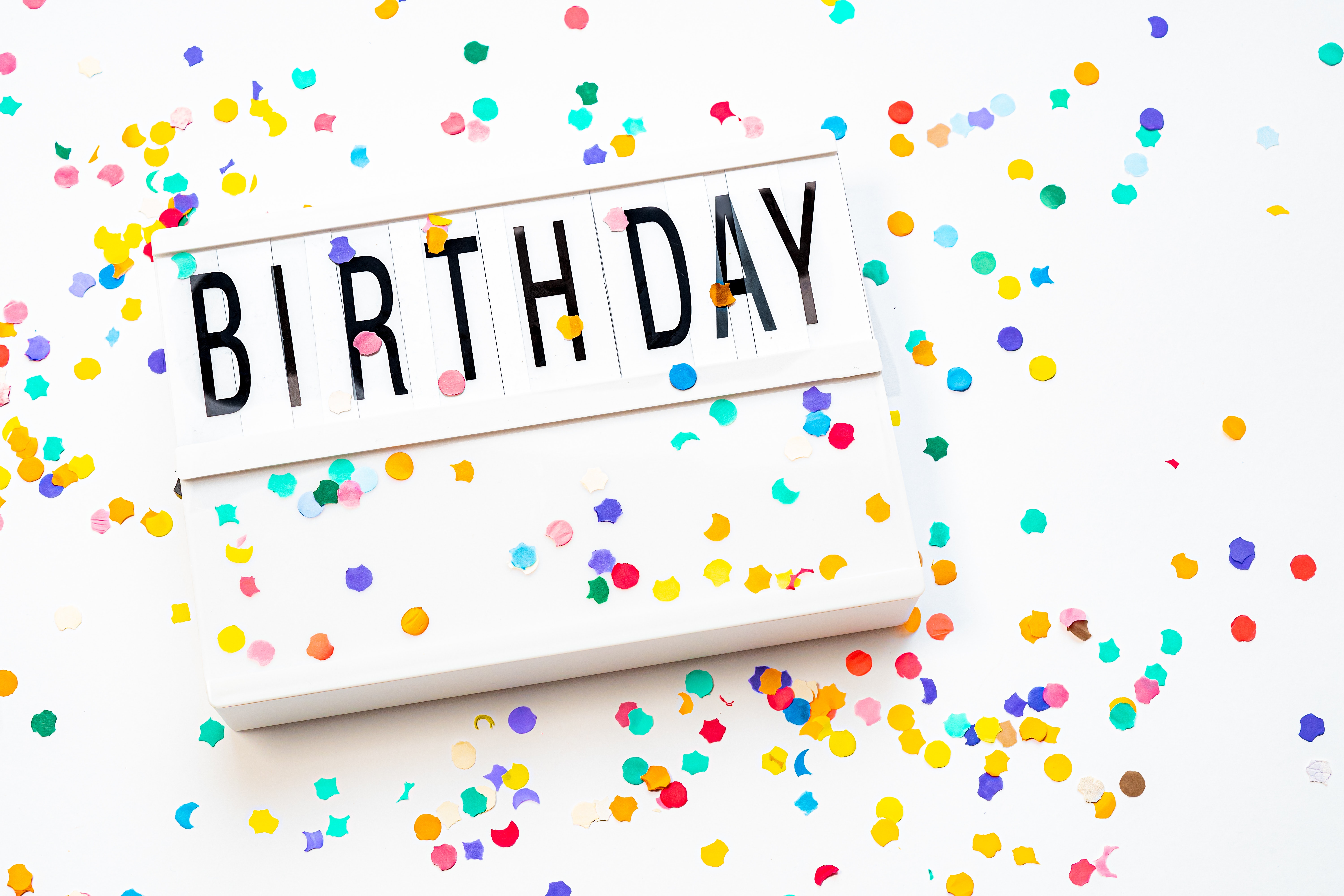 A birthday is a very special occasion in the Korean culture, and the importance of a birthday celebration is practiced right from the start, as the biggest celebration of all is a child’s first birthday. However, this practice of celebrating each other’s birthday continues, and just like in English, we celebrate each other’s birthday by saying ‘happy birthday’ to each other. So knowing how to say ‘happy birthday’ in Korean is pretty important in the Korean culture.

In this article, we’ll explore various expressions related to birthdays. First, we’ll explain how to ask when someone’s birthday is and how to say when our birthday is, and then we’ll wrap up by showing you how to say ‘happy birthday’ in Korean!

The Korean word for birthday is 생일.

This is the standard word for ‘birthday’. Now if you didn’t know already, much of Korean language is based on Chinese characters and this word 생일 also has its roots in the Chinese language. The syllable 생 (seng) means ‘birth’ and 일 (il) means day, so the literal meaning of 생일 is birthday.

There is a more respectful term for the word 생일 and this is 생신.

생신 is a more respectful term, and how we use this term is dependent on our age and position in the society in relation to the person we’re speaking to. For example, if a 40-year-old person was talking about the birthday of his or her English teacher who’s 30, then he or she would probably still use 생일 as even though the student should be respectful to the teacher, the teacher is younger, so using 생신 is unnecessary. However, if a 14-year-old student was referring to the birthday of his or her teacher who’s 30, then the student should use 생신 to be respectful to the teacher.

So the key aspect to the use of 생일 and 생신 is dependent on your relationship with those you’re speaking to.

How to ask when someone’s birthday is in Korean

To ask when someone’s birthday is, it’s important to use the correct language form, depending on who you’re talking to.

Asking when someone’s birthday is in Korean – respectful form

In Korean, the language you use depends mostly on whether the other person is older than you and whether you are familiar with that person, so let’s say that you’re 30 and you’re talking to your friend’s mother whom you’ve only just met. She’s somewhere in her 60’s and the topic of her birthday party has come up in the conversation. You want to ask her when her birthday is, and in this case, you can ask – 생신이 언제세요?

Asking when someone’s birthday is in Korean – polite form

This time, let’s imagine that you’re talking to someone who’s a few years older than you. You know the person well, but as the other person is older, you need to be respectful in your language use. Then you can ask – 생일이 언제예요?

Asking when someone’s birthday is in Korean – casual form

Lastly, let’s say that you are close friends with someone, but you don’t know their birthday yet. In this case, you can ask when their birthday is using casual language – 생일이 언제야?

You can also ask this question when you’re speaking to a young child.

How to say when your birthday is in Korean

Now, there are two ways to say when our birthday is – respectfully and casually.

Saying when our birthday is in Korean – respectful form

We can say when our birthday is respectfully like this:

First 제 생일 means ‘my birthday’, 5월 5일 means ‘May 5th‘ and lastly 이에요 is the polite form of the be-verb, so this sentence means ‘My birthday is on May 5th‘.

One important point to keep in mind is that we use 생신 only when we’re asking about other people’s birthday, and not when we’re talking about our birthday. This means that when someone who’s in their 60’s says when their birthday is, they don’t use 생신 – they use 싱일.

Let’s look at the casual sentence and see how it differs from the respectful sentence.

Saying when our birthday is in Korean – casual form

How to say ‘happy birthday’ in Korean

Of course, as with all Korean sentences, there are different levels of formality, so let’s look at how we can change this sentence into respectful, polite and casual forms.

We can make the verb 축하하다 into a very respectful form 축하드리다 by combining the noun 축하 and 드리다, which is a respectful form of the verb ‘to give’, so 축하드리다 kind of means ‘I give congratulations’.

Moreover, 축하드리다 is the infinitive form, so we can further change 축하드리다 into 축하드려요 to make it into a respectful sentence.

The polite expression is made by changing 축하하다 to 축하해요, and we use 생일 instead of 생신. This expression is the most commonly used way of saying ‘happy birthday’ in Korean.

A more formal form of this expression is 생일 축하합니다.

This is a formal form of ‘happy birthday’ in Korean, and we would use this expression in a very formal situation, such as when we’re saying ‘happy birthday’ to someone in a much more senior position, but isn’t old enough to use the word 생신.

Finally, if we want to say ‘happy birthday’ to a close friend, then we can say 생일 축하해.

We use this phrase to say ‘happy birthday’ when talking to close friends, or close family members who are of similar age, such as our siblings or cousins.

So in article, we looked at key expressions related to talking about birthdays.

First, there are two forms of ‘birthday’ in Korean – a standard and a respectful form:

When asking when someone’s birthday is, there were three levels of formality:

You can say when your birthday is in two different ways:

Lastly, to say ‘happy birthday’ in Korean, you can say 생일 축하하다 (sengil chuka-hada), but you can say this in four different ways:

That’s a pretty comprehensive overview of the language related to talking about birthdays, so next time you meet a Korean person, you should put into practice what you learned in this article.

Thanks for reading this article and if today happens to be your birthday, well then… 생일 축하해요! 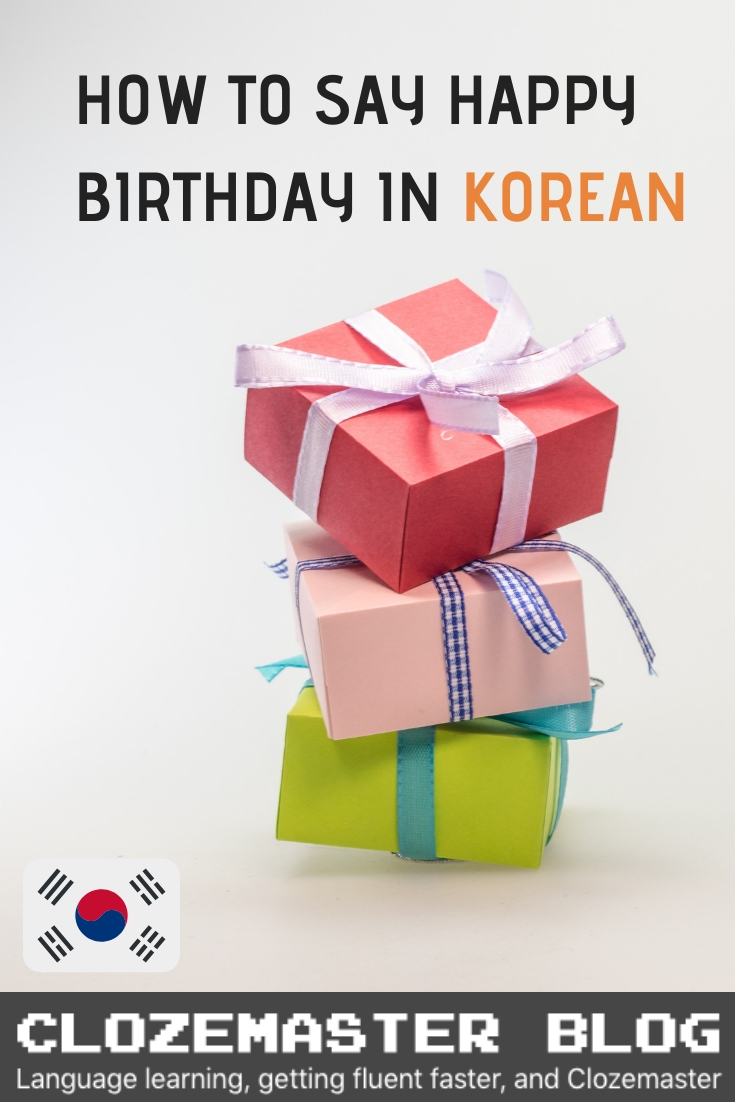