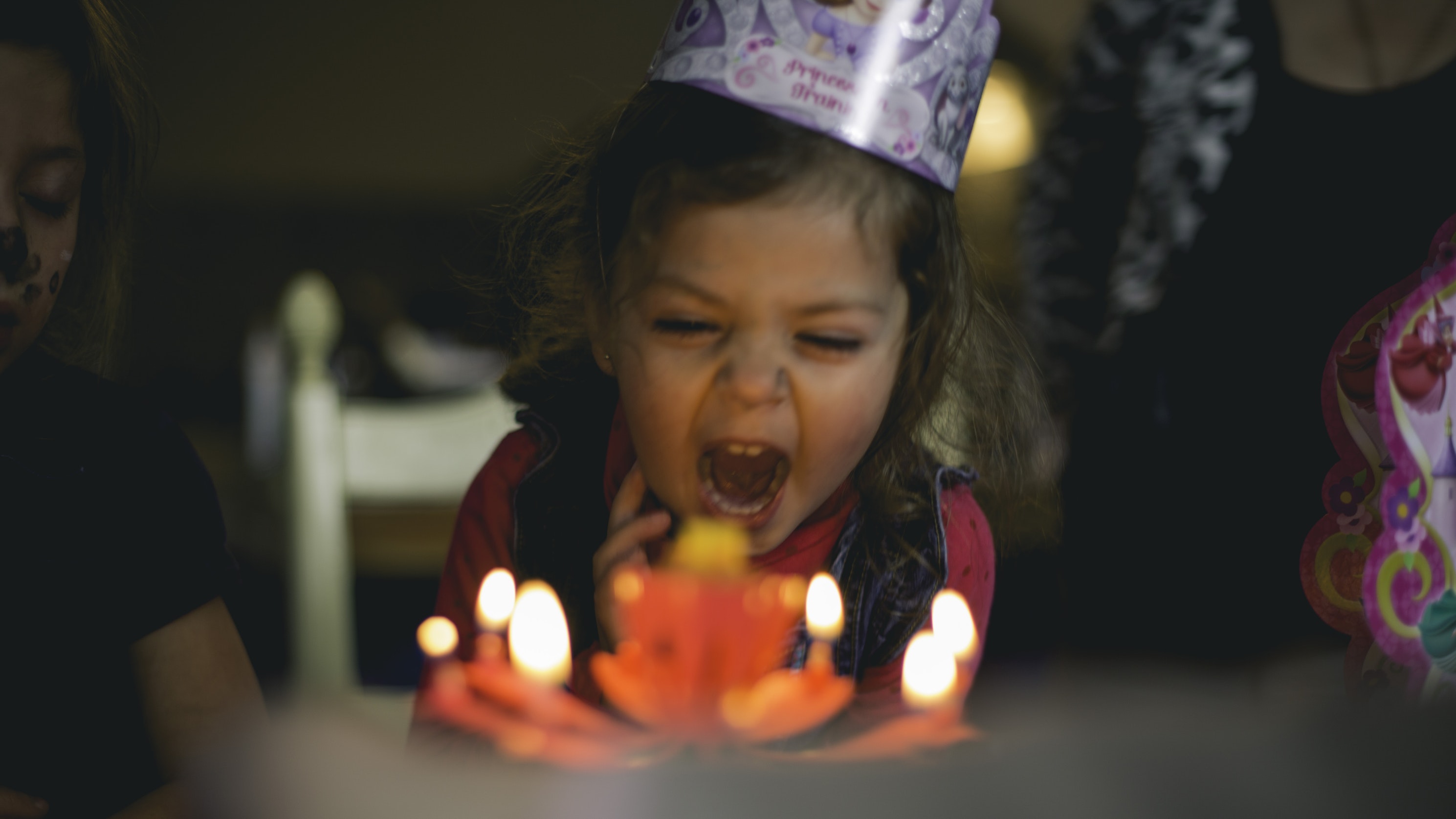 Whether you’re from the United States, from Poland or from Brazil – celebrating your birthday in your home country surely comes with a variety of different and interesting traditions.

Obviously, Germany also has a lot of customs and rituals to celebrate your or someone else’s special day. Some will look quite familiar, and some of them might be a bit more on the quirkier side.

Let’s take a closer look at some of the traditions that you might encounter when celebrating your or a friend’s birthday in Germany!

Before You Wish Someone a Happy Birthday in German…

When I first came to the US, I was shocked by how many times people would wish me a happy birthday in advance, even if my birthday was still days away.

You see, in Germany wishing someone a happy birthday before his or her actual birthday is considered rude and supposedly brings bad luck. Some Germans get extremely offended about it – even though they’re not superstitious otherwise.

Where this fear of a premature birthday wishes comes from is not exactly clear, although it might simply have to do with the overall tentativeness and caution that’s so specific for German culture.

As sinister as it sounds, while someone’s birthday might only be days or hours away, you never know what might happen during the hours in between — better safe than sorry!

(So before you get ahead of yourself and wish someone a happy birthday in German, just make sure you double-check the date.)

Now that we got this important detail out of the way, let’s look at some of the birthday traditions and rituals you might encounter when celebrating in Germany!

How to Say “Happy Birthday” in German

When looking at the differences in language between English and German, the phrase “Alles Gute zum Geburtstag” (Happy Birthday) will certainly strike you as being significantly longer than its English equivalent.

But not only that, the translation is equally different: it means roughly “All good for your birthday”.

Another expression is “Herzlichen Glückwunsch zum Geburtstag” (Heartfelt congratulations on your birthday).

You could also say “Alles Liebe zum Geburtstag” (Everything nice for your birthday).

Some random trivia: next to the German version of the song “Happy Birthday”, which is called “Zum Geburtstag viel Glück” (All the Best of Luck for your Birthday), the English version is also widely recognized and sung.

There are numerous traditions and rituals to celebrate someone’s birthday in Germany and depending on where in Germany you are, these might vary slightly.

There are, however, a few things that are custom throughout the whole of Germany.

Throw Your Own Party

You’ve read that one correctly – when it comes to celebrating your birthday in the land of Apfelschorle and Elfmeterschießen, you are expected to throw the big party yourself, if you would like one (!).

Whether it comes to your kid’s birthday bash or celebrating your 50th birthday with your closest friends, it is expected that the birthday boy/girl shows some initiative and plans the party and all of its details.

That is not to say that surprise birthday parties thrown by close friends aren’t a thing, but generally speaking, the “responsibility” of celebrating your birthday and finding a venue to do so is on the person whose special day it is.

Bring Your Own Cake

Just as with celebrating your birthday, it is expected from the birthday boy/girl to bring cake or other sweet goods either to school or to the office for those who are not celebrating their birthday to enjoy. Sounds pretty weird? It kind of is.

While it seems to be a strange custom, I can guarantee you it will make you very popular with your fellow students or co-workers.

This is pretty much the same as in, for example, the United States and other places of the world. When blowing out the candles on your cake you can make a wish (if you’d like to do so).

However, you’re not supposed to tell anyone – if you do so, the wish will not come true. Also, if you miss some candles and are not able to blow them out at the first attempt, the wish won’t come true either (although most people are not very strict about this, especially when it comes to children blowing out their birthday candles).

Apart from the tradition of candles on a birthday cake, there is also something called a “Birthday Wreath”. Usually, it is a small wreath of flowers with a candle in the middle. Some families also like to use a wooden circle which has a number of candles in it (one candle for each year of the person’s life) plus one big candle in the middle of the circle to symbolize good luck.

This wooden “wreath” is usually used up to age twelve and more popular for kids’ birthdays, but my family still uses our flower wreath every year and for every family member, despite the fact that every one of us is above the age of twelve.

Depending on where you are staying (or living!) in Germany, you might notice that some traditions are very specific for the region you are at.

Surprisingly, a lot of these very quirky birthday traditions are from northern Germany — and I, being from southwestern Germany, had never heard about them before researching the topic myself.

Let’s have a look at the most creative birthday customs that Germany has to offer!

Of Socks and Boxes

If you are a guy, living in northern Germany and are turning 25 years old you most likely will be gifted a Sockenkranz (a sock garland).

Well, in German there’s the phrase “Du alte Socke!” (which translates to “You old sock!”), and essential way of reminding you that you are now officially exiting what’s considered “your youth” and moving closer to the big 30. The term “old sock” is usually reserved for men.

When you are gifted a sock garland, the tradition is that you follow the (usually very long) garland of socks and have a shot of liquor every few meters.

As a woman who is turning 25 years old, you are given a garland of cartons (usually about the size of cigarette boxes) since you are now officially “eine alte Schachtel” (an old box).

Chores on Your Birthday

Another very odd, and sort of mean birthday tradition in northern Germany is having to perform a chore on your 30th birthday – if you are still single, that is.

If you are a single female and are turning 30, your northern German friends might expect you to clean a few door handles or door knobs (with a toothbrush, of all things!).

If you are a guy and you are not married or in a relationship, your friends will expect you to sweep the stairs of the city hall or any other flight of stairs in a busy part of town – preferably while you’re wearing an especially silly costume to make the experience even more pleasant.

Your friends might even throw pieces of paper, rocks or leaves in your way to keep you extra busy while you’re sweeping. The only way to get out of this rather awkward situation is a kiss by someone of the opposite sex.

Another fun fact: in many German cities or city districts either the mayor or another city official will drop by to visit someone who turns 100 years old to personally congratulate them. Usually there’s also a small article and a photo in the local newspaper of the event. This is a wide-spread tradition all over Germany and is not specific to a certain region of the country.

Now that you know a bit more about how Germans celebrate their birthdays, maybe there are even some traditions you’d totally like to incorporate in your next birthday bash, like treating your coworkers or friends to a delicious home-made cake? 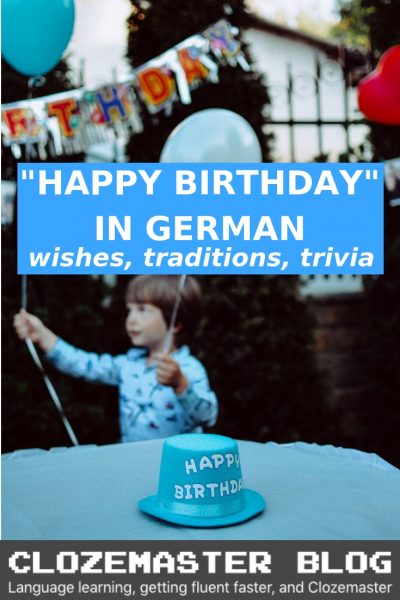 2 thoughts on ““Happy Birthday” in German – Wishes, Traditions and Trivia”