From pre-schoolers learning first-language vocabulary through to medical students memorizing anatomical terms, flashcards have been an integral part of education for hundreds of years.

One of the first recorded uses of flashcards was in Favell Lee Mortimer’s book Reading Disentangled (1834), which came with a set of picture flashcards that were used to teach basic phonics to middle-school children. Back then, flashcard learning strategies were basic – students would simply read these cards over and over until they memorized them all.

However, as flashcards have evolved to make use of digital technology, an increasing amount of research has looked into more effective ways to design and use these helpful study aids. Most teachers agree that it’s no longer sufficient for students to simply cycle through a deck of flashcards. They need to consider a variety of factors such as the size of decks, use of pictures and video, spaced repetition and gamification. Most importantly, students need to consider what style of flashcards they want to use – single-word or context-based.

Apps such as Anki, Memrise, and Quizlet focus on traditional single-word flashcard study. For example, a student of French may have a set of flashcards for studying the days of the week, with the French word on one side and the English translation on the other side.

In contrast, Clozemaster focuses on studying vocabulary in context by prompting the user to fill in the missing word in a sentence. For example, the same student studying French days of the week can use flashcards like this:

While students in the past have had success using traditional flashcards, a growing number of people have realized that studying in context provides a faster, more enjoyable and more effective method for studying a large amount of vocabulary.

If you’re currently using a single-word study app and are looking for a better way to learn, here are three reasons you should consider trying a context-based app. 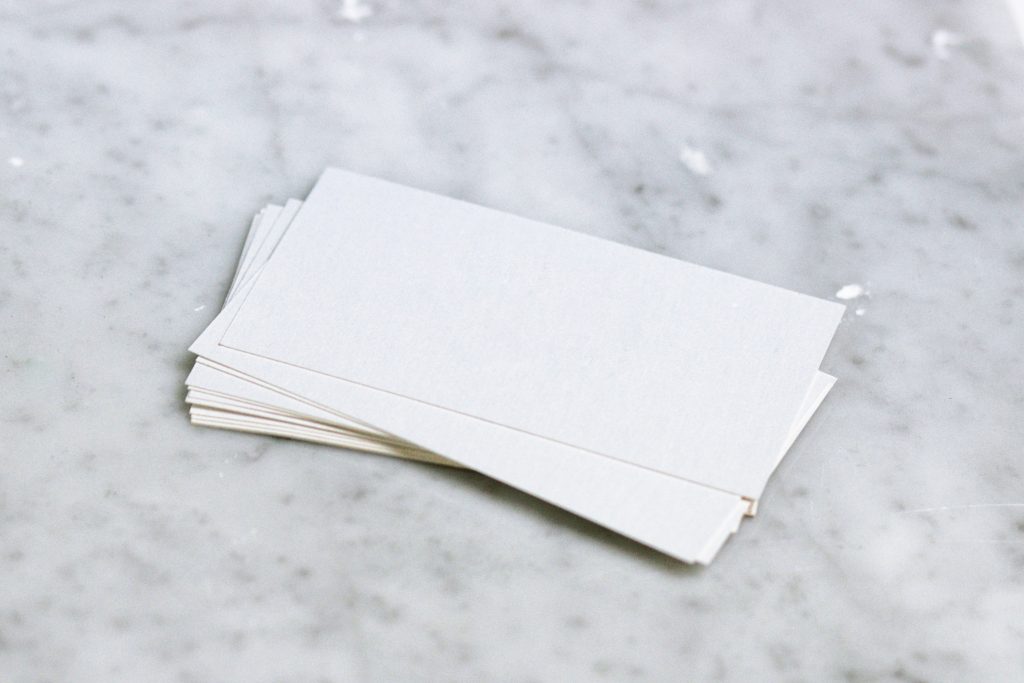 1. The Meaning Of A Word Often Depends On Context

“A person who knows a word knows much more than its meaning and pronunciation. The contexts in which a word can be used to express a particular meaning are a critical component of word knowledge.”

– Professor of Psychology George A. Miller

It would be great if you could simply learn the meaning of a foreign word and be able to use it in any situation. However, in almost every language, there are cases where the appropriate word in your first language may not be appropriate in your target language. For these situations, you’ll need to examine the context of the sentence to determine the right word to use.

Two great examples are the words “hot” and “cold”, which are two of the first adjectives you’ll learn when studying a second language. They are very simple words to use in English:

“The weather is hot.”

If you’re a student of Spanish, you might have a set of single-word flashcards that show “caliente” is the word for hot. Caliente is the right word to use when describing the quality of something.

However, if you use the word caliente to describe the weather, you’ll get some strange looks from native speakers. Instead, you should use the word “calor”. To explain that the weather is hot, you would say:

You might think that this is a special case that is only used in Spanish, but here’s an example from a different language.

If you’re a student of Japanese, you might have a set of single word flashcards that show “samui” is the word for cold. Samui is the right word to use when describing cold weather or temperatures.

For both these examples, you could use single-word flashcards to learn the words hot and cold, but still have no idea how to use them appropriately in real-life situations. A better alternative is to use flashcards that present the words in context.

With context-based flashcards, you’ll learn the meaning of the word, the appropriate situations to use the word, and you’ll also have the chance to learn related vocabulary at the same time (eg. baño = bath, mizu = water).

One of the most commonly asked questions by language learners is “How many foreign words do I need to know to achieve my goal?”. The specific goal of the student could be anything, such as being able to read a foreign newspaper or having a near-fluent conversation with a native speaker.

While the answer to this question depends on a variety of factors, the answer is usually in the thousands. For example, it’s estimated that you need to learn up to 3,000 characters to read a Chinese newspaper or 6,500 words to have a near-fluent conversation in Italian. Learning this many new words or characters is a daunting task, but it’s certainly achievable using flashcards. A dedicated student using flashcards would most likely be able to learn the required vocabulary in a few years. 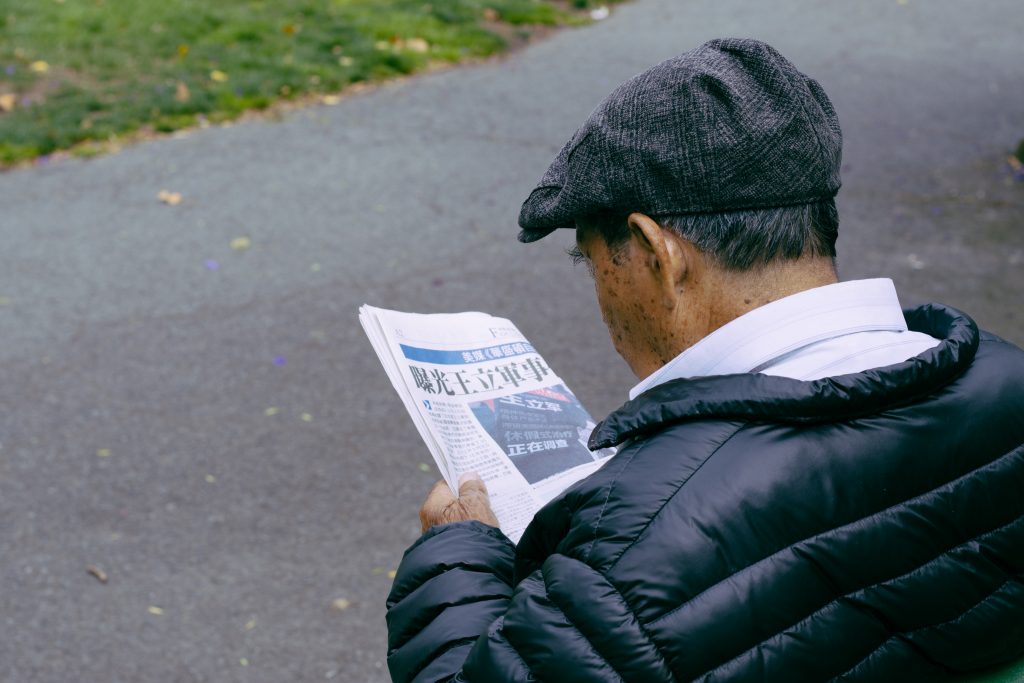 But what happens when you start to encounter difficult words that you don’t know?

What happens when you come across a rare Chinese character and don’t have a dictionary on hand, or your Italian conversation partner starts talking about complex topics that are beyond the scope of daily conversation?

In these situations, you need to rely on context for determining the meaning of unfamiliar words. Surprisingly, context-based word learning is a strategy that doesn’t come naturally to everyone. According to many language teachers and researchers, it’s a skill that needs to be taught and developed through practice.

In this study of vocabulary teaching strategies by the National Reading Panel, researchers concluded that students need to be taught both specific words and word-learning strategies for effective vocabulary retention. When presented with vocabulary in rich contexts provided by authentic texts instead of in isolated vocabulary drills, students become more actively engaged in using words, analyzing word meanings, and creating relationships between words. This helps develop skills and strategies that will allow them to more easily determine the meaning of unfamiliar words.

What this means is that students who use context-based flashcards instead of single-word flashcards are not only learning new words, they’re fine-tuning their ability to analyze complex language that they haven’t yet studied. This is a vital skill for any language student aiming for fluency, as real-life situations rarely offer you the chance to stop a conversation, pull out your dictionary and look up a word.

3. Long-Term Vocabulary Retention Can Be Aided By Context Learning

If you’ve ever used single-word flashcards for studying vocabulary, you’re probably familiar with this situation.

You take out your deck and start slowly practicing new words and their meaning.

As you get into a rhythm, your pace starts to increase.

Before long, you find yourself flying through the cards.

As you reach the end of the deck, you congratulate yourself on how quickly you learned all those new words. But when you go back and check how many you remember… your mind is completely blank.

To successfully retain second language vocabulary, you need to focus on learning strategies that embed words in your long-term memory, not quick-fire strategies that utilize your short-term memory. For most people, this means repeated exposure to new words. By “repeated exposure”, we don’t mean three or four times. Researchers have estimated that it takes up to 17 exposures for a student to learn a new word.

The problem with single-word flashcards is that you’re constantly tempted to move on to the next card. You get exposure to a new word, but it’s a very weak exposure that leaves little impression. Context-based flashcards force you to slow down and consider each word in the sentence. As you process all these words, this increased focus helps you make stronger neural connections and makes it easier for your brain to store the word in your long-term memory.

Take The Next Step On Your Journey To Fluency

If you’re interested in joining thousands of happy students who have found success using context-based flashcards for language learning, head to the Clozemaster website to try the web-based version of Clozemaster, or download the mobile app available for Android or iOS to keep learning anywhere. 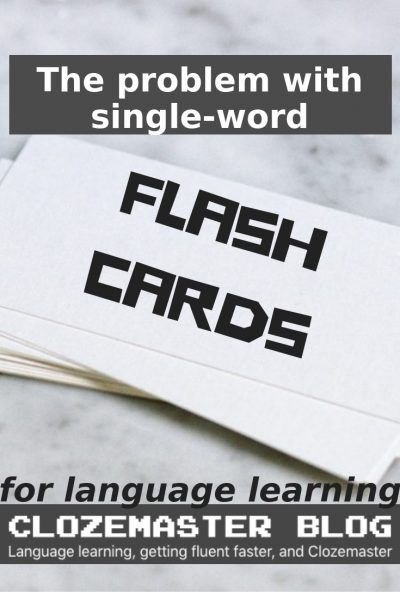